Mass searches of an elderly woman who got lost in the forest, did not give anything. Finally, the clever dog Yucca got down to business.

Kasimovsky district of the Ryazan region is famous for its forests, and many of its inhabitants are fond of “silent hunting.” So now, after heavy rains, local mushroom pickers rushed into the thicket in search of. Early in the morning, 86-year-old Valentina Nikolaevna left for mushrooms, but she too long did not return home, and relatives scored alarming.

Fellow villagers first combed the forest on their own, then attracted rescuers. Among the volunteers who participated in searches, there were also volunteers of the regional unit “Lisa Alert”. Night fell, but the old woman could not be found.

Dog handler Anastasia Priymak and her dog Yucca to no avail wandered along forest paths and ditches, then returned to the village. Volunteer asked to give the dog a sample of the smell of a lost woman – and Yucca instantly took the track! Half an hour later, rescuers soldered hot tea to Valentina Nikolaevna: she didn’t leave too much far from home, but got off the road and stopped orienting in the forest. 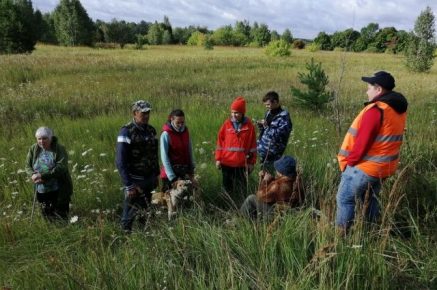 Yucca is a purebred dog taken from the shelter, but she is very talented. In spring I took a training course in track work, and already with the beginning of summer, along with his mistress, is actively involved in the search missing people.