He has already been dubbed the Greek Hachiko in honor of the touching hero old movie – and he responds. However, where now lives this white dog, no one knows his real name.

One morning, the 40-year-old Haris went to work and did not return – he had a car accident. But his faithful dog could not reconcile with loss. The dog somehow found a place on the road where a modest monument was erected to its owner (it’s over twelve kilometers from home), and stayed there to wait for his friend. 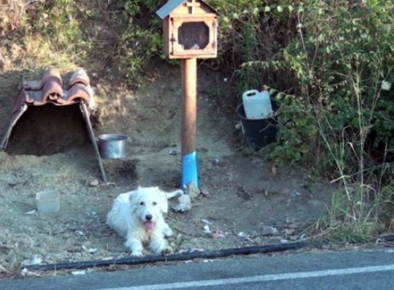 A dog is waiting for its owner near a noisy track

Locals, sparing the dog, tried to shelter him more than once, but he again and again ran to the monument by the road. Then for “Hachiko” built a booth and began to feed every day. Already for more than a year and a half the dog does not leave the place where for the last time saw her beloved alive.