Promotions dedicated to an unusual holiday – Front Dog Day traditionally held in Russian museums. The initiator was Moscow Victory Museum, and the first to open this relay was Shchekinsky Museum of Local History (Tula Region).

August 19, 1943 the legendary shepherd named Dina managed not only to undermine the German train of ten cars, but also stay alive. This date is marked as Front Dog Day. All in all, in the operations of the Great Patriotic War 68 thousand dogs participated: they were saboteurs and signalmen, scouts, sappers and orderlies.

Front-line dogs participated in the Victory Parade, in several Cities of Russia installed monuments to them. 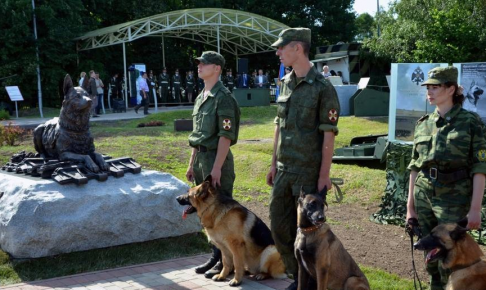 The culmination of the celebration of August 18 will be a large-scale action on Poklonnaya Hill organized by the Victory Museum with the support of dog training organizations. Here will be an interesting reconstruction of the events of the war years in which modern dogs show how their heroic ancestors worked.