In the Buryat village of Atsagat are preparing for the discovery of a unique of the monument: the sculptural composition is called “Taban Hoshuun Mal” and unites figures of five pets.

The “heroes” of the unusual monument were a horse, a camel, goat, ram and sheep – livestock farming is kept on these five pillars region. The initiator and sponsor of such an expensive creative construction became a philanthropist and entrepreneur Bair Dolgorov. It is expected that the new monument will attract increased attention of tourists.

The grand opening is planned in a week, and now final assembly and landscaping work is being completed. 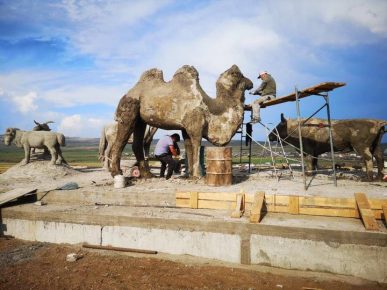