On a farm in the village of Paraboch, which is 70 kilometers from the city Grozny, Hussein lives with his beloved animals. In the household men are not only hens and cows, but also camels, ostriches and deer.

Despite the fact that only 473 residents live in the village, here come from all over the republic on an excursion.

Hussein from childhood knows what hard economic labor is. The father of a young imam passed away early, so he had to take all the hardships of caring for the animals in the household. Since then Hussein does not part with them and even instills a love for his beast descendants. 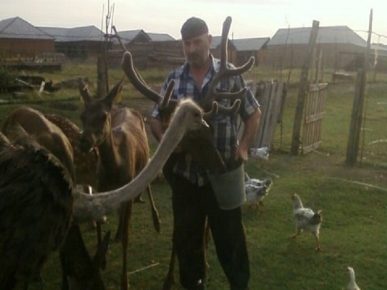 At first the farm was small, and there was almost no animals on it, but over time it has grown. It all started with a few ostriches, which brought the farmer’s son Tamerlan. As it turned out, these birds with more than pay for themselves, as their eggs go like hot cakes of 2 thousand per thing.

“I really love each of my animals. Their love is manifest in good relation to me and the whole family. Such a simple truth life, “explains Imam Hussein.

Pupils from all schools come to see the inhabitants of the farm republics. Hussein happily rides everyone on camels.