A rare fish was discovered in Primorye on August 5. According to scientists, a meeting with this species in Russia happened for the first time.

The water dweller is called the herring king, belt-hunter or belt-fish. He lives in the Pacific, Atlantic and Indian oceans, preferring warmer waters. The appearance of the fish is pretty menacing: long body, big eyes, scary mustache. Met fish resident of Vladivostok Antonina Tunyk with loved ones even thought that the belt is poisonous. But actually the herring king is harmless for a person. 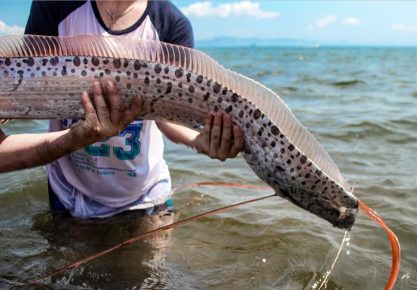 This belt is still small, the length of adult fish can reach 8 meters (photo by Antonina Tunyk)

After a photo shoot with a sea animal, he was released back into the sea. Some believe the appearance of the herring king is a harbinger tsunami, but scientists refute this myth. Biologists, by the way, find very pleased, according to them, for this rare fish any ichthyologist ready to go to the ends of the world. 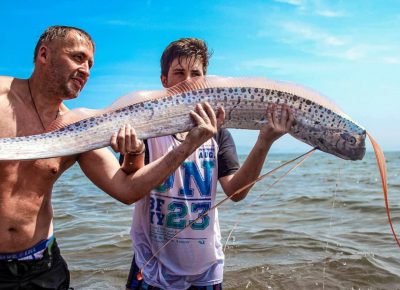 Norwegian fishermen called the herring king fish because greeted at the head of the shoals of herring, and also thanks to the “crown” on a head formed by elongated rays of the dorsal fin (photo Antoniny Tunyk)