A New York court sentenced Rebecca Katz to probation for stealing a cat, whom she wanted to save from euthanasia.

The young woman worked as a nanny, and the owners were pleased with her. But once, having returned home, they found out that there was no nanny, and together with her own cat disappeared. A note appeared in which the worker admitted: she took the animal. Indignant couple appealed to the police, Rebecca was detained and put on trial.

The theft was there, and the court issued a guilty verdict, although conditional: during the hearing, unexpected details were revealed. Working in the house, Mrs. Katz became very attached to the master cat – affectionate outbred minke whale named Tiger. She stroked him brought goodies, and the cat always looked forward to it. 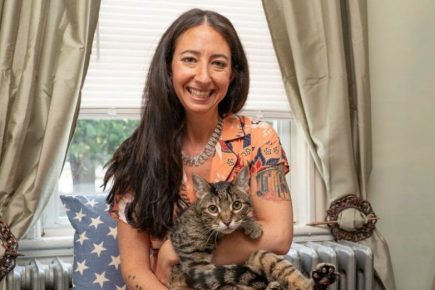 And suddenly Rebecca accidentally found out that the owners were planning to put to sleep Tiger – probably they were tired of the old and sick cat. Woman so scared for her pet that she didn’t come up with anything better than to take it to yourself. Applicants claim that the cat terminally ill, but the former nanny invited the veterinarian and proved: this is not true. She agrees to return the cat to the owners only in that in case they refuse euthanasia.