Goat Dashka has recently become famous throughout Russian peninsula. She lives in the city of Gubkinsky, or rather, under the walls multi-storey building, where she was tied back in the spring by negligent mistress.

Local defenders attracted the attention of the press to the fate of the unfortunate goats, and she was in the center of turbulent events: first, Dasha flashed on television, then she was abducted, sought and again returned to the mistress … But the place of Dashkin remained unchanged habitat – it is tied to a column in the open. 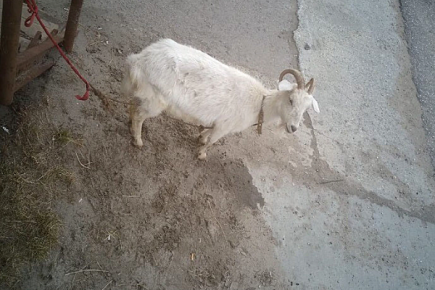 Zoodefenders again sound the alarm: the “street” goat looks exhausted, shabby and bitten by insects, it often does not have water and plenty of food. Kind people help the animal, and the mistress, seems to be quite satisfied with this state of affairs. Into the situation local lawyers intervened – advised compassionate citizens, how to influence the owner of a goat or take away an animal from her. AT In the near future, Dasha’s fate should change for the better.