According to the 360. Omsk television channel, in the Omsk House of Creativity children settled squirrel. Fluffy animal made a nest and entrusted the education of their cubs to employees and pupils of DDT.

In fact, this story has a long beginning. About a year back two workers of the children’s home of creativity in the oktyabrsky okrug Omsk picked up little squirrel on the street. The animal was very weak thought they won’t survive. But a few days spent in caring hands, with good feeding and warm shelter did their job. The little squirrel has grown to such an extent that at some point he escaped.

And when she grew up and became an adult squirrel mother, then she came nursing their offspring in the House that gave her a second a life. 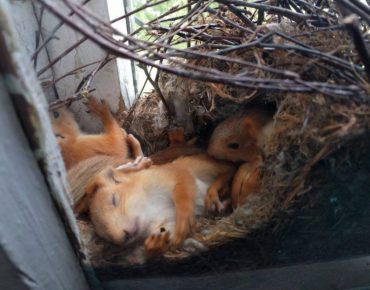 Once the employees of the house of creativity saved the squirrel’s life, and now she trusts the lives of her children to them

Squirrel made a nest in one of the windows of the house of creativity. Itself dragged there twigs. And the hospitable DDT staff helped go out three of her squirrels. The offspring grew and went into the forest.

Since then, history has repeated itself. And now his third litter squirrel mother trusts the caring hands of workers and pupils Orphanage in Omsk.