Unexpected addition to the Zheleznogorsk park family entertainment (Krasnoyarsk Territory) surprised even its employees themselves. The local donkey became a mother, but she gave birth to an unknown animal – poslika.

Four-year-old Oslana wasn’t planning to “marry”, for her and there was no couple in the zoo. Donkey spent time in a separate an open-air cage, and communicated except through a fence with an inhabitant of a neighboring paddock – a cute pony named Dan. They often drove them together and grazing.

People were busy with their own affairs and did not notice that the couple lyrical relationships ensued. After some time, Oslan began suspiciously quickly recover, and then gave birth to light charming baby – poslik. 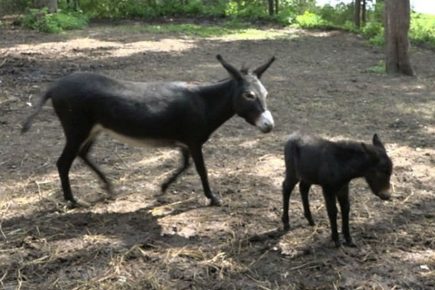 Such hybrids are not too rare, they are often called hinnies, but this turned out too unexpected. Poslik feels great and fast is growing. While he is very similar to his mother, and dad’s features gradually everything more manifest in it.