In Chukotka, a polar bear came out to people. The meeting took place 9 august.

A young bear appeared on the pier in the port of Anadyr. Biologist Anatoly Kochnev believes that she is about a year old. Most likely animal attracted fish waste, which littered the coast. On the spot incidents put up a police cordon, but the she-bear sailed away the sea on its own – it was scared off by a port worker. As a result no one not injured, however, the bear may return. The place has already become for animal feed. 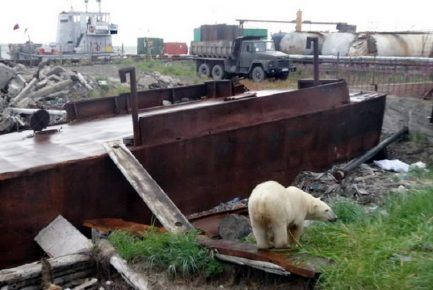 According to the biologist, in the middle of July the she-bear lived for several days. next to the lighthouse on the Spit Russian Cat 60 kilometers from the city, and then near the village of Ugolnye Kopi (photo by Anatoly Kochnev)

Experts think what to do in case of the return of white dipper. It can be dangerous for residents of Anadyr, because this the beast is a predator and preys even on walrus giants.