On a fine day, nothing boded ill: a black horse grazed on the green grass outside the outskirts of the cottage village in Ukhta, mistress admired her beauty Carmelita. And suddenly a misfortune happened – the animal fell into a quagmire.

The owner of the horse called rescuers. Arriving at the place the SPAS-Komi division had a difficult task – to pull out swamps a large animal that has managed to plunge deeply into dangerous slush. The rescue operation lasted more than eight hours. 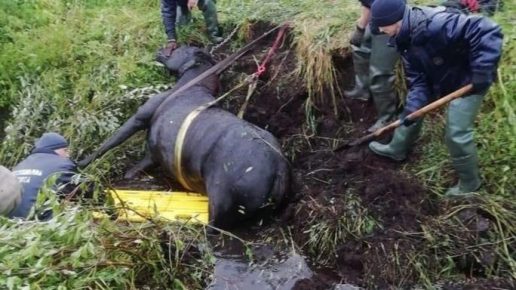 Carmelit managed to free only from the second attempt: in the first time, when almost everything worked out, the exhausted animal fell back into the moat. The ten year old horse was in deep stress and finally finding yourself on solid ground for a long time not could stand on its own.