In the state of Jammu and Kashmir (India), a homeless man came under mudflow landslide and almost drowned in the mud. He was found and saved Labrador named Ajaxi.

Army unit patrolled the road after a strong rainfall that triggered a landslide. Suddenly worried Ajaxi Labrador Rescuer, favorite of the entire military unit. Dog headlong rushed to a heap of stones and dirt, under which it was difficult suspect the presence of anything alive.

But there a man showed up: he was in the unconscious condition, but was alive. The military quickly dug up victim and taken him to the hospital. For his work Labrador and his master received awards. 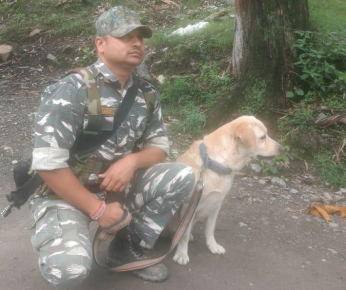