In hot weather, not only people suffer, but also animals. That’s a rare bird of the Buzzard, having lost food due to the heat, almost died. Fortunately, the animal was discovered and rendered on time. help needed.

Specialists saved a rare Buzzard in the Astrakhan region Bogdinsko-Bakuchaevsky reserve. Picked up a simple bird residents, and ornithologists managed to bring it back to normal. It turned out that no injuries were found in the Buzzard, but it was severely depleted.

According to experts, the bird of prey was starving, because in hot period victims of the Buzzard are active only at dusk. therefore it is difficult for the bird to find food. 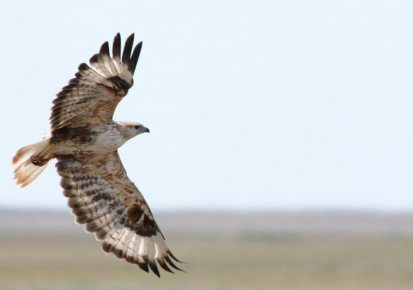 In the wild, Buzzards often die of starvation.

The bird did not need special care: the predator was fed on for several days, and then returned to freedom.

Kurganniki – a species listed in the Red Book and Astrakhan region, and the Russian Federation. Its number is declining. Bird refers to hawk family, and its wings have a wingspan of up to 1.5 meters.