The website of the Russian news agency Ura.ru reported about a blind man who collects money for his guide dog.

A dog named Barry has a special profession – he helps people with visual disability to move freely in the streets cities.

A resident of the city of Berezovsky opened a fundraiser for operation for a faithful assistant. Dog Barry accompanies his the owner of Mars Gafurov since 2016. A man is visually impaired therefore, a guide dog is necessary for him, like air.

Barry had an accident. According to Mars, they are together with the dog were on the site. When the man let go of the leash Barry ran away and ran right onto the roadway where he was hit the car. The same driver delivered to the vet clinic of the dog and its owner a car that did not notice and hit an animal.

Barry had surgery on his spine. Now you need time for recovery. All treatment cost Mars 23 thousand rubles, but the man had no such money at that time. The clinic went to him towards and left a debt for him until mid-November. 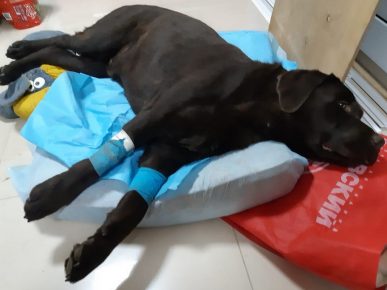 “For me, this is a serious amount, because since I’m disabled the first group, with money is difficult. ”

But for recovery and rehabilitation, you need two times more. Mars has already spent on medicine for his comrade several thousand rubles.