In Crimea, in the Bakhchisarai Miniature Park, squirrels were orphaned. They would have died if not for the good new “mother” – the local gray a cat that recently gave birth to kittens.

First, two red squirrels were brought to Pouche, and the cat was right there thoroughly licked the kids and treated them with their milk. Food and care would be more than enough for all children – both gray and red, but good people, learning about the nurse, began to bring her with the territory of the park more and more new foundlings.

As a result, seven of Pusha’s personal kittens were added seven squirrels, and milk was not enough. Then to feeding Orphans joined the staff of the Miniature Park. At first time squirrels were treated only with goat milk, and then gradually began introduce into the diet more familiar food for these animals: nuts and fruits. 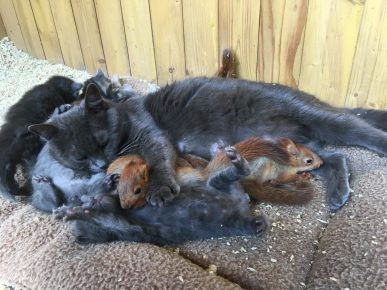 But the cat is still engaged in raising all its children single-handedly. Probably soon she will teach saffron mushrooms how to catch mice – Pusha does it very well.