In winter, a man at the veterinary clinic in Oberscheld (Germany) brought a very tiny fox and admitted that he accidentally shot down car fox, and her cub could not stop dying of hunger and cold on the side of the road. The poor fellow was lucky: when the baby is a little strengthened, veterinarians handed it over to good people, to whose aid came … kind dog.

The house of the Schmeing couple is home to many animals: two piglets, a cat Leopold and a collie dog named Ziva. Here she is instantly imbued with the tenderness of the foundling and became about him take care like a real mom. The little fox named Dinozzo absolutely no doubt that he is a dog son, and behaves respectively. 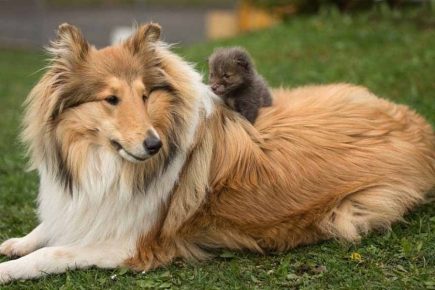 Scottish shepherd dogs, as they call the collie, are special dogs. They adore children, never offend small and weak. To such remarkable pedigree qualities of Ziva added unrealized maternal instincts, and she with soul, as her own puppy, took up the fox. 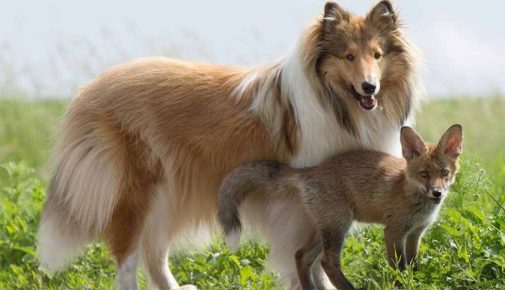 In this picture, Dinozzo is already more than three months old – you don’t find that he became like his new mother?

Dinozzo is now more than six months old, it’s health, beautiful and a happy animal that does not show the habits of a wild beast. The young fox and the dog are inseparable and very friendly – it seems that this is love for life.