Unusual order prepared by the Ministry of Foreign Affairs Great Britain. Employees of the department were forbidden to give “bribes” to the local cat – to feed him sweets.

Palmerston black and white purebred cat, officially composed on service in the British Foreign Ministry, became irresponsible to his duties – worse to catch mice. The cat works in this field since 2016, and until now there have been no complaints against him: for 16 months a tailed “official” killed at least 27 rodents.

Myshelov was repeatedly set as an example to his lazy colleague from the Prime Minister’s residence – cat named Larry and as they say jinxed. Now Palmerston shamelessly uses sympathy of the employees of the Ministry, accepts from them all tasty tribute, but ignores official duties. 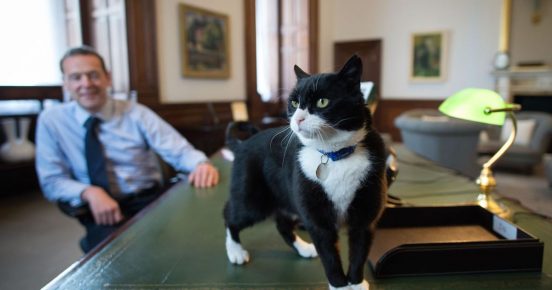 They say that even Simon was noticed among the “bribe takers” MacDonald – Deputy Foreign Minister, repeatedly treated the cat canned food, and subsequently ordered to put him on a diet.

In addition to Palmerston and Larry, in London there are no less seven service cat-mousetraps, the contents of each of which annually costs the state treasury one hundred pounds.