Cats and cats are on official allowance at the police Of Thailand. Especially a lot of tailed “cops” carry a dangerous and difficult service in Bangkok – the capital and largest city of the country.

This has already become a pretty tradition: in many police Offices of Thailand, along with ordinary employees, carry service … cats. Psychologists believe that because of this, positive attitude of the police is increasing, relations in teamwork and teamwork.

In a plot at Bang Sue Station, a tabby cat named The Nungmani even issued an officer certificate.

Recently, Thai police opened a special page in social networks where they publish photos about their workdays mustachioed employees. 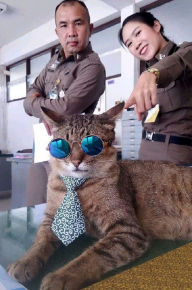