Cytology is a microscopic examination of cells that were taken from the body. exploring these cells, including their quantity, size, shape, color, internal characteristics, and how they fit together can often be diagnosed a certain disease. 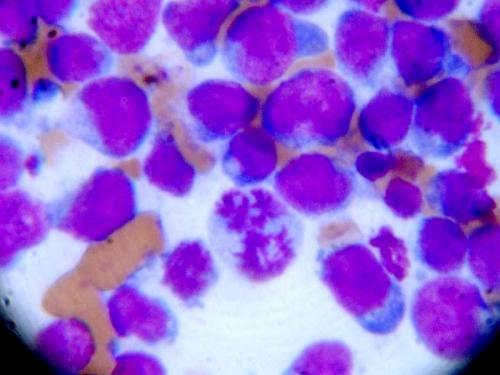 When is cytology used?

Cytology is most often used to diagnose character. tumors and cones on the surface of the body. However, cytology also used to evaluate:

What information can cytology give?

The most important thing cytology can say is whether the problem is inflammation or neoplasia (neoplasm). If inflammation is detected, then cytology is able to determine the cause, for example, a bacterial infection, a foreign substance, or an allergy. If neoplasia is detected, then, she can determine is whether it is malignant (cancerous) or benign.

What information will help the vet in the treatment?

After the veterinarian finds out the nature of the disease, he will take steps to find a specific cause (bacteria, parasites, fungi, allergies, etc.) in order to prescribe the appropriate treatment.

Cytology can predict how a tumor will behave in the future. This can help determine the validity of the application. surgical operation and its urgency.

If surgery is scheduled, a general understanding of the type of tumor will affect the next steps needed to prepare your home animal for surgery. It will also be easier for the surgeon to plan how remove the tumor if its nature is known in advance. And finally tumor information will allow the vet to predict what will be occur after surgery and he will be able to respond to the following questions:

How is a cell sample taken?

There are several ways to collect cells from tissues, in depending on where the problem is and in what type of tissue. The most common method is to use a thin needle or biopsy needles. This is an easy way when a fabric sample taken with a sterile narrow needle attached to a syringe.

What are the benefits of cytology?

Cytology is a simple, quick and relatively painless way. collecting information. Requires minimal equipment, and samples can be collected without sedation or anesthesia. With comparative small waste of time and money allows you to put final diagnosis, or at least helps determine general criteria for the disease, which allows the veterinarian to prescribe the following steps to determine the disease.

What limitations does cytology have?

The main limitation of cytology is that cell samples do not can show a complete picture of what is happening in the tissue. it occurs because the samples are very small or missing important cells. In addition, some tumors do not obey. to the rules – sometimes cell samples look benign when the tumor is malignant, and in some cases all vice versa.

what stage follows after cytology?

The next stage after cytology is histology. Histological a study is a study of whole tissue samples that collected surgically. Histology focuses on the structure of the tissue, its development and functioning.

In most cases, histology allows you to put final diagnosis, and is generally considered “golden Diagnostic standard. Histology is often required to determine whether the tumor is benign or malignant and to confirm the findings of cytology. If Your pet has had surgery to remove tumors, it is desirable to require that the tissue be investigated using histology.

Rabbits
Rabbits today are gaining widespread popularity as pets, and this is not surprising, because

Rabbits
Contrary to popular belief, rabbits belong to hare-like, not rodents. There are many breeds

Rabbits
An article on “how to breed rabbits” may seem somewhat strange, since everyone knows