According to the “Moscow Komsomolets” (Izhevsk), environmental the prosecutor’s office of Udmurtia took the initiative to develop measures to ensure the safety of life of wild animals. Too often forest the inhabitants are under the wheels of motorists.

Last year alone, according to environmental officials prosecutor’s office of Udmurtia, six wild boars and almost eighty moose. And since the beginning of this year, victims of traffic accidents three boars and 39 moose. They all died. 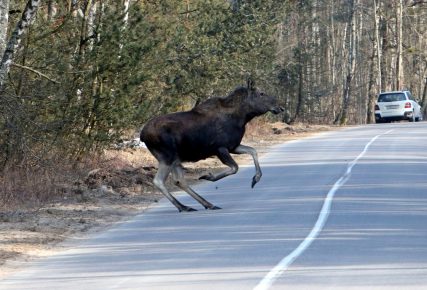 For the reporting period (from 2017 to the present), the animal world suffered from human progress by nearly three million rubles.

As one of the measures for the prevention of accidents involving wild animals in the prosecutor’s office proposed to be installed on the forest highway additional characters – speed limit. Now they stand on the track only Wild Animals signs. But speeding on the freeway the car in most cases does not have time to brake when the animal jumps out under the wheels.

In addition, they sent a letter to Yandex LLC asking them to add in the navigation system information about the presence of signs “Wild animals. ”