What is the reason for the death of so many rare turtles (ridley) failed to install yet. State Attorney General investigates Oaxaca in Mexico.

Earlier Mexican fishermen noticed about three hundred dead olive turtles that ended up in fishing nets. But how It was the reptiles who died, while it is not known. They could get entangled in networks and die or already be dead there.

The population of this species of turtles is extremely vulnerable, as individuals grow very slowly, respectively, olive turtles are on the brink of extinction. But an important factor is anthropogenic impact when egg laying and adults are caught, and places for breeding offspring. Therefore, it is very important for biologists to find out the reason for their deaths off the coast of Mexico. 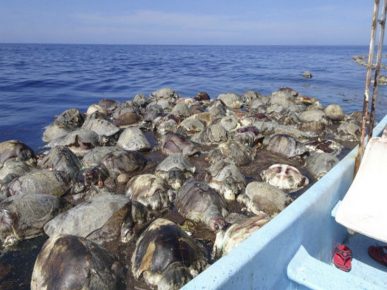 Specialists in this area suggest that turtles could swallow poisonous algae or fall on the hooks of anglers. But in Mexico, the capture of these individuals is prohibited from the end of the 20th century.