West Highland White Terriers – small hunting buried dogs, possessing assertiveness, wonderful flair and excitement, whose homeland is Scotland. In the British Isles these dogs established themselves as wonderful fishers of otters, badgers, rabbits, small rodents, acting underground, not hearing the owner. But in Russia they are purchased to serve the person at home conditions due to small dimensions (weight about 8-10 kg, height in withers – 25-30 cm) and docility, if the owner from the very dating a puppy managed to establish the correct connection (where the dog always obeys the owner). Also Russian representatives breeds successfully participate in competitive events, but in the capture they are rarely used in our country as a burrowing beast. the outward features of these Scottish dogs are white coat without any blotches and clever dark-colored eyes. The addition of such terriers strong, compact and quite muscular. Skull box convex, transition from forehead to muzzle pronounced, superciliary arches protruding and conspicuous. The muzzle tapers towards the nose (black), eyes wide apart relative to each other, protruding forehead dogs makes eyes deep set. Ears West Highland White Terriers are small, triangular in shape. The neck whose diameter is at the base quite large, muscular and strong. Chest deep ribs smoothed around the edges. The back is straight, in the lumbar region is expanded, muscular Tail high, medium (or even small) length, kept perpendicular to the dog’s body, without bending over your back. The limbs are strong (especially the back muscles) and powerful, short, proportional to the body of the dog. Wool, straight and thick, the undercoat is soft and short. They live about 12-15 years. 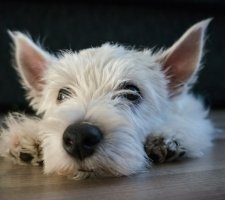 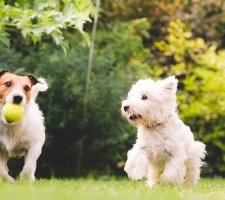 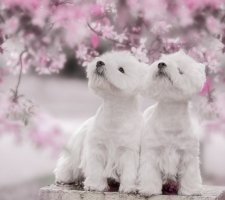 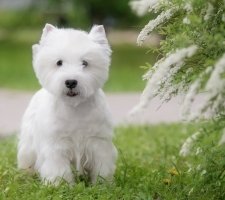 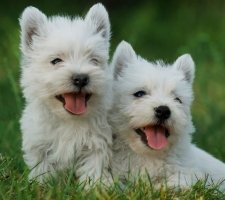 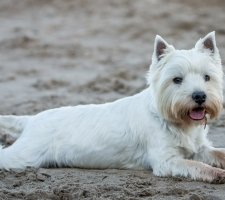 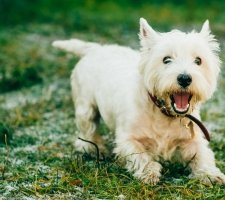 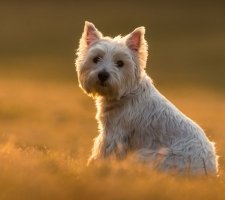 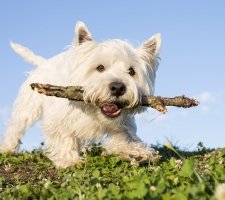 Their history is mysterious, since in Scotland such hunting dogs live a long time ago, and purposeful breeding work began only at the beginning of the 19th century. The earliest references to white terriers dating from the 12th century are considered however, it is not known whether these were the true ancestors of today’s news. (how often their owners name is short) or only similar by the exterior of the dog. Lovers and connoisseurs of the breed are similar in opinion that they came from a variety of terriers living on the island Great Britain. The closest relatives of West Highland Terriers are the core and scotch terriers, which is noticeable to the naked eye – so these three breeds are similar in appearance. Often these dogs crossed among themselves, and the Scottish owners did not divide them by breed, calling Scottish terriers. West Highland White Terriers Togo time could be not only white, but also cream, as well as light piebald. At the end of the XIX century, news was divorced in several places in Scotland, and the breeders had animals, differing in exterior but similar in their hunting data. The purpose of the West Highland White Terriers at that time was to catch of game, and most breeders noted that white (or almost white) shade favorably distinguished news from animals on which hunt was conducted. After all, the same small core-terriers could often be mistaken for a fox, therefore, the hunter could confuse and shoot not game, but your own dog. White did the color of the news the dog is visible at any time of the day and in any weather. Gradually West Highland Scottish Terriers Crossing between themselves, which subsequently showed the world a compact, active and indefatigable dog in hunting – a white highland terrier, merciless game, friendly to people.

West Highland White Terriers are most often purchased between the ages of 2 up to 4 months. Almost immediately, the owner should do raising a dog, because bad news can be stubborn. But those individuals who are lucky to be under the tutelage of a competent and quite tough host, become obedient and friendly. Most often they get along peacefully with other pets. In some cases, a natural hunting instinct can cause them to set off chasing rodents (and even cats), but it happens infrequently if the owner taught the dog “do not touch their own.” Dogs of this breed curious, active, playful even in adulthood. Loyal to the owner, may, if necessary, act as housing guards, raising a loud bark. However, they do not differ in spite for people, therefore, as a guard dog they are rarely bred. West highland white terriers love to be in the company of people with pleasure accompany the owner. They are not intrusive, they can need to find something to do if the owner does not have the opportunity take time.

These small terriers can be kept in small apartments, and in homes with large living space. Dog place should located away from the draft, it should not be equipped only with a bed, but also with toys (so that the dog can spend its energy when the owner cannot entertain her). Also constantly with the bed should be a bowl of clean drinking water. IN some occasions for West Highland White Terriers from a stove bench and a tray with a filler for a toilet. A prerequisite West Highland White Terrier contents are quite long and active walks. If the owner has his own land a dog of this breed will enjoy spending time in the yard, play, run, just breathe fresh air. But even with such a pastime should not replace full outings (to the training ground) and trips out of town walks around the perimeter of the courtyard, because communication with others dogs, the contemplation of people, cars, the perception of the sounds of the city is extremely important for the socialization of the animal. Care for the hair of the news terrier will require certain time (and often cash costs). AND it’s not at all the snow-white color of the fur coat – these wire-haired dogs get dirty no more often than the other four-legged (in addition, hard hairs can repel dirt). Hair care involves daily (or at least every other day) combing a metal brush, during which not only are removed dead hair, but also cleans the dirt, improves the process animal blood circulation. In addition to home care, practically non-shedding West Highland Terriers (like their other wire-haired brothers – fox terriers, core terriers, welsh terriers, etc.) need in the services of masters for trimming (trimming – removal of old and thinned hairs by plucking). The procedure follows spend at least 2 times a year. Sometimes non-exhibition dogs trimmed at home or in the grooming salon (where they can offer hygienic or model haircut, as well as a number of services: care for claws, washing, cleaning the ears, teeth and paraanal glands, cosmetic procedures, etc.). Lack of attention to caring for with wool the news can lead not only to the formation of warlocks – in untidy wool parasites are able to start. Also not uncommon cases of allergic and fungal diseases in wirehair west highland white terriers. But bathing too often a non-exhibition dog is not worth it, just wash the paws after walking, and “bathing” days to arrange as they become dirty, but not more often 3-4 times a year. By the way, dogs of this breed do not have specific odor and fairly clean. As food for news terrier you can choose natural food or ready-made dry food (before buying a puppy, you should ask the breeder which food is familiar to the baby). Benefits of finished feed – balance, low consumption, saving host time. The downside is the high price of a really good feed. Feeding natural foods (not to be confused with dishes designed for people) will require from the owner not only time, but also certain knowledge to correctly calculate calorie content, choose the right ones components for preparing a dog’s dish, as well as count the content of vitamins and nutrients. As part of natural food high-quality meat should prevail (which at present is also not cheap).

The characteristic Scottish West Highland White Terriers should be brought up in an atmosphere of love and reasonable rigor. It’s naive to believe that a puppy that is allowed any prank will grow up brought up the dog. The owner must from the first hours of the dog’s stay in the house make the right contact with the animal, then the dog will trust man, considering him a leader. Uneducated news can commit a series of actions, unpleasant and dangerous – to pursue others animals, pick up any food or objects on the street, do digging up host beds and so on. A trained dog is not It will cause trouble to neither the owner, nor anyone else. IN praise for good behavior can be encouraged a treat and a kind word. As a punishment, you can act in a strict voice, and also ignore the dog, not responding to her calls for the game. Beat the animal is not worth it – it is not it’s only a shame, but it also divides the news from the owner, makes distrust of to man. Dogs of this breed are trained from about six months – on your own or with the help of an instructor. In the process of studying the dog recognizes not only the main commands, but also becomes correct behave outside the house. Probably the best training option West Highland Terrier, when the process is led by the owner under specialist guidance. But for this, from an early age, a puppy must trust the owner.

News is not a health issue; it is with due care and the absence of serious illnesses are able to cross and 15 year threshold. However, a number of diseases inherent in these terriers such: eye diseases (cataract, dry keratoconjunctivitis, inversion century, atrophy of the retina, etc.); fungal and allergic diseases, and also tumors on the skin (yeast and allergic dermatitis, atopy, food allergy, histiocytoma); musculoskeletal diseases apparatus (joint dysplasia, craniomandibular osteopathy); heart disease (cardiomyopathy); brain disease (meningoencephalitis); endocrine system diseases (chronic hyperglycemia).