Ticks are carriers of a large number of diseases. Doctors know 15 diseases that transmit ticks, and 7 of them can cause pathologies in humans. Among them, borreliosis (disease Lyme) and tick-borne encephalitis. Over the past 30 years in many countries 30 times increased the number of cases of infection of dogs with tick-borne encephalitis. The range of ticks and their distribution has changed physiology. Now they are becoming active in February-March. Some species can cause infection even in winter.

The method of infection and the characteristics of the pathogen

Tick-borne encephalitis is a disease caused by the introduction of a virus, which affects the tissue of the brain and spinal cord of the animal. Causes it to flavirus (Flavivirus) – coated with a lipid membrane a microorganism containing an RNA helix whose dimensions are 40-50 nm. The carrier and the main “vessel” that supports life virus, are ixodid ticks. Dog infection occurs by transmission – with the suction of a tick. Tick-borne virus Encephalitis is divided into three genotypes:

Each type of virus causes characteristic symptoms and damage. With the secretion of the salivary glands, the virus enters the blood the bed of the dog. There it is captured by macrophages. It happens in them the first phase of the reproduction of the virus. Around the absorbed virus a vacuole is formed within which the virus replicates RNA and the formation of viral envelope proteins (capsid).

The resulting adult virions gather in groups surrounded by vacuole, and transported to the inner surface of the cell membranes. Tearing it, they go into the intercellular space. FROM Viruses enter lymph nodes by lymphatic current, invade endothelium vessels transported to the liver, spleen – this is where it happens his second reproduction.

Lymphatic flow carries the virus into the motor neurons of the spinal cord, localized in the cervical region, and through them the pathogen enters cerebellum and pia mater. The incubation period in adult dogs is 1-2 weeks. When infecting puppies, this the period is shortening.

Symptoms and signs of pathology

Symptoms depend on the form of tick-borne encephalitis. Allocate the following forms of lesion:

Symptoms do not appear immediately. The initial stage is hidden, then the following signs of the disease appear in dogs:

Tick-borne encephalitis virus causes severe a fever that has a biphasic course. First phase may last 2 to 4 days. At this time, the virus invades and spreads throughout the dog’s body. First phase of fever accompanied by nonspecific signs:

Then comes a temporary remission, which lasts 7-8 days. At 25-32% of dogs in the second phase cause symptoms of meningitis, encephalitis. Forecast for the introduction of the Far Eastern strain of the virus adverse. Far Eastern virus causes headaches brain in the form of meningitis, meningoencephalitis and focal lesion with high probability of death.

It primarily causes paralysis of the forelegs and respiratory musculature. This strain is most dangerous because it causes severe effects. New species have been reported Far Eastern strain that caused tick-borne hemorrhagic encephalitis.

With the meningoencephalic form of the course of the disease, diffuse or focal lesion of the nervous tissue. Diffuse shape accompanied by:

With focal encephalitis, the disease manifests itself in convulsions, muscular dystrophy, severe neurological disorders. As symptoms of encephalitis can resemble various pathologies of nervous system, then to clarify the diagnosis, it is necessary to differential studies.

Diagnostic methods for the pathological condition

In addition to collecting medical history and physical research, a veterinary The doctor prescribes laboratory and hardware studies:

The ability to conduct in-depth research is not in every veterinary clinic. To simplify the diagnosis, you can bring in Veterinary clinic of a live tick taken from a dog. In the laboratory will conduct an investigation of the insect for pathogenic microorganisms, as a tick may contain not only a virus tick-borne encephalitis. Examination of the insect is carried out for the presence of virus antigen, less often by PCR detect fragments of the RNA of the virus. Research can even be carried out on tick fragments.

Symptoms of the disease appear when the number of viruses increased to a certain level, which complicates the treatment. Therefore in the period of seasonal activity of ixodid ticks must be applied infection prevention measures and carefully inspect the dog after every walk. If a tick is found that has sunk into the skin, it carefully remove and immediately seek medical attention help.

Since the disease causes a virus that develops inside the cells, then treatment is difficult to select appropriate methods. Antiviral therapy is carried out using antibiotics, able to penetrate the blood-brain barrier. Are applied Isoniazid, Pefloxacin, Co-Trimoxazole, Rifampicin. Chloramphenicol.

These drugs have a strong toxic effect on the body. dogs, therefore, on the recommendation of a veterinarian prescribe more gentle medicines, for example Tienam, Cefelim, Meronem, Pefloxacin, Ceftazidime. Symptomatic therapy includes:

Vitamin preparations are given to a sick dog, as in animals reduced levels of vitamins B and C. For the treatment of dogs with with neurological symptoms, ribonuclease can be used. Injections the drug is carried out on the recommendation of a veterinarian. Injections 3-4 days last. By this time, usually reduced Body temperature. 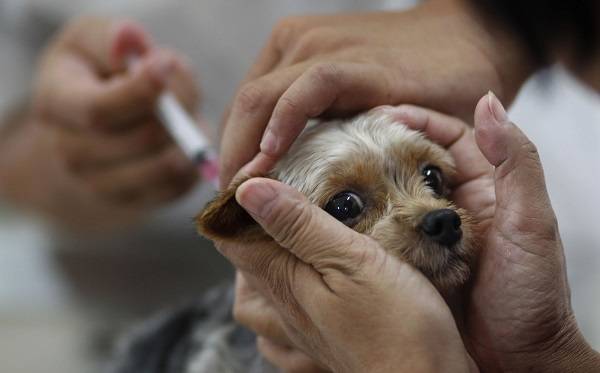 With meningial form of encephalitis and fever, it is necessary apply treatment aimed at detoxifying the body. The introduction of saline and buffer solutions, taking into account state of water-salt balance and blood pH. When expressed neurological syndromes are prescribed corticosteroids – prednisone. At the same time, the dog is given potassium salts, and a special high protein diet.

Tick-borne encephalitis can lead to bulbar disorders, which are expressed in dysfunction of swallowing and breathing. For relief of symptoms through a nasal catheter is administered moistened oxygen. To improve respiratory function, use the drug Cytochrome. Hyperbaric oxygenation courses are also prescribed. For to eliminate the effects of hypoxia, sodium oxybutyrate is prescribed and Seduxen. In the complex treatment of tick-borne encephalitis should follow a special gentle diet, especially in dogs with dyspeptic disorders.

To exclude the possibility of infection, the dog before walking must be protected. For this, special acaricidal drops at the withers, sprays. But remember that action insecticides begin after a few hours, therefore application immediately before walking the dog does not protect her from tick attacks. As a barrier method used special collars. They scare away ticks. But after each walks it is recommended to conduct a thorough examination of the animal. Inspect areas with the thinnest skin – behind the ears, under the paws, on belly.

If a tick is stuck in the dog’s skin, it cannot be lubricate with oil, as fat only “stuns” the insect. It’s better drip alcohol onto the parasite, and then carefully “unscrew” it from skin. The bite site is disinfected and immediately seek help, since the tick can be a carrier of not only tick-borne encephalitis, and an effective vaccine for dogs against diseases, transported by ticks does not exist.