A white cat with multi-colored eyes gave birth to ten kittens. it The event took place at the Van Kedisi Center (Turkey).

The center is engaged in the study and breeding of an elite breed of Turkish national heritage van. Priority is given here animals of a pure white color, one eye in which is yellow, and the second – blue.

Van cats are an indigenous Turkish breed, since ancient times inhabiting the shores of the mysterious Lake Van. These beauties live longer than their relatives, have a proud and independent character, and – They swim and fish very well.

One of the problems of breeding is pedigree infertility cats: they give birth to an average of four kittens. Professor Abdullah Kaya, who runs the Van Kedishi Center, has developed a special diet for their wards. This, in his opinion, contributed to the appearance of a record litter of ten kittens – still cats of this breeds never produced more than seven babies. 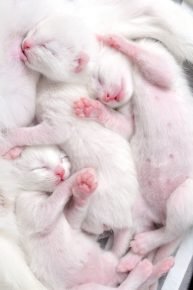 Center staff help young heroine mom to feed children, and those grow and develop well. The details of the secret diet were not disclosed.