In Ohio (USA), police officers received an unusual call. To help the goose “asked” their cub.

An outfit of two policemen controlled the park area. Barely officers Cecilia Charron and James Givens stopped the car as noticed that a goose was rushing towards them, waddling over. She went to the car and tapped the door with its beak. Deciding that bird in this way begs food, James treated it with bread. But she didn’t leave and was obviously worried about something.

The goose brought the cops to the shore of the lake, and then it became clear what happened. In the grass, without strength and movement, lay a small gosling – he inadvertently entangled in a rope from an inflatable balloon. When the goose mother realized that she couldn’t free the chick, then she hurried seek help from people. 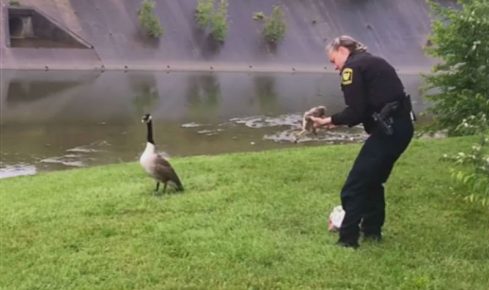 Releasing a gosling proved to be a daunting task

Cecilia had to work hard to unravel the fluffy paws baby, and all this time the goose did not leave her, something spoke in her own language. Feeling that he is free, the gosling immediately returned to his brood.