Reindeer recently appeared in Tambov French Garden for riding children. Still in the same lively ride horses, ponies and a camel took part – this was perceived by the townspeople as due, but it was the deer that caused a storm of indignation in social networks.

Mason, that’s the name of the deer, actively worked for an hour on the first day two, tired and was sent home – to rest. But that was enough so that the news gets a wide response. Concerned Tambovites were outraged by the operation of the “deer”, some even suggested to arrest the mistress, and the animal, on the contrary, to release and release in forest. 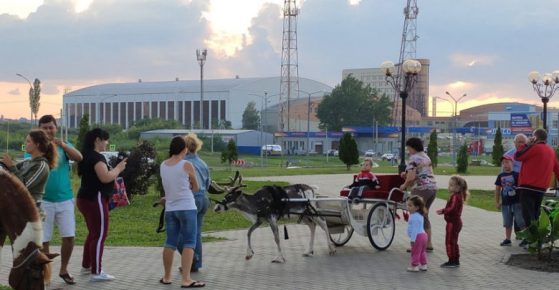 The mistress, as it turned out, is Olesya Koval. Two teenage oleshki, Meyson and Fairy, back in February she acquired in livestock farming near Murmansk. Settled in his the estate, where, besides them, six more ungulates live, he cured, made vaccinations, fed.

Now they are one and a half years old, and as the veterinary doctor Anton Modnov, animals in good condition, look well-groomed and old enough to do riding work – the main thing its purpose.

Law enforcement authorities confirmed that the law and animal rights in this the case has not been violated in any way, but they nevertheless began their verification – her they will pass the results on to the authorities: to Rosprirodnadzor and Regional Veterinary Administration.