Shiba Inu is a small hunting dog whose homeland is Japan. A distinctive feature of these dogs is a peculiar sly smile. and a muzzle, somewhat reminiscent of a fox, as well as a tail “donut”. Despite such a cute appearance, these animals showed themselves as Great companions while hunting game and birds. Known cases when Shiba Inu (also called Shiba Inu) is successful showed themselves during the hunt for the beast, whose weight and size significantly exceeded the parameters of the dog (wild boar, deer, etc.). Today, Shiba Inu is popular all over the world, but their true reverence It turns out in Japan. Shiba Inu are excellent hunters, but often these dogs are brought in with the goal of acquiring a four-legged friend – they inquisitive, active and very clean. Shiba Inu is rare in Russia accompany the owner on the hunt, as preference is given more traditional hunting dogs for our country. Shiba Inu have a proportional strong physique and well developed the muscles. The head of the dog has a wide skull box, pronounced cheekbones, pointed to the nose. Shiba Inu dogs have scissor bite. The ears of the dog are standing (in adults), triangular shape. The eyes of shiba inu dogs are small, more often whole dark brown hue. The dog’s neck is strong. Torso wide enough, strong, well muscled stomach tail wide, curved in a circle, lying on its back animal. Limbs of moderate length, straight, well developed shoulder blades and hips. Shiba Inu wool is thick, tough, elongated tail. The undercoat is soft, thick. The color of the dog breed is enough diverse: red, black with light (red and silver) tanning marks, zoning (the tips of the hairs are black). Sometimes Shiba Inu wool may be excessively light in color. But the greatest popular with bright red dogs with light areas in cheekbones, throat, neck, abdomen, limbs and lower tail. Height the males of the shiba inu are 38-42 cm, the females are 35-39 cm. The weight of the males is 9-15 kg, bitches – 8-14 kg. The life span of Shiba Inu is about 10-15 years old. 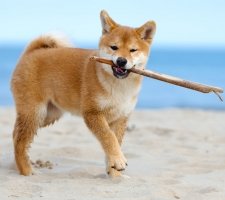 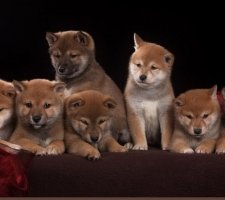 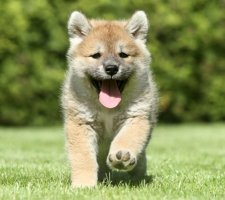 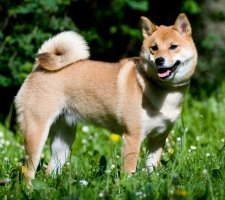 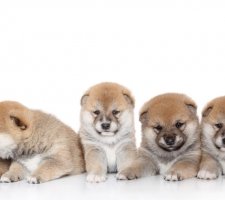 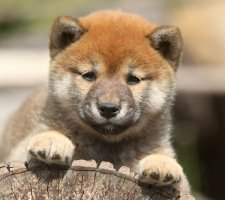 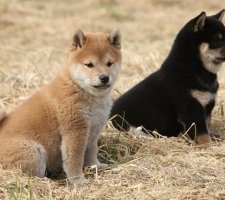 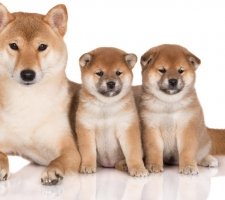 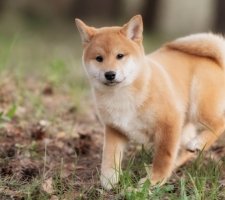 Shiba Inu is the oldest breed of dog that does not exist on Earth. less than 2500 years old. The ancestors of Shiba Inu are considered Japanese native dogs that were human helpers in the hunt and gathering back in the Stone Age. Gradually indigenous dogs crossed with those imported from Central Asia, which showed the world new and new species of breeds. Descendants of the Japanese Aboriginal dogs were divided into 6 breeds of different sizes – large, medium and small one. Among the breeds was also mentioned the Siberian Sea – a small dog the size that helped the hunters during the prey of the wild beast. However, in every region of Japan in ancient times there were their own shiba, their appearance and habits were completely different. That is, at that time in Japan there were many individuals that were considered a breed siba, but in fact they were different breeds of small dogs size. The name of the Siberian breed then certainly included the name area in which the dogs lived. It is believed that today’s Shiba Inu – the ancestor of Shiba dogs from the Sin-syu, San-in, Mino and some others. The distinctive features of these dogs are restraint in a manifestation of love for a person, mobility, short stature. Color dogs ranged from black and white to red-red. Up to the beginning of the 20th century, the Shiba Inu uncontrollably crossed with those imported into Chow Chow country, setters and other breeds. And only in the 1920s active breeding work began, the purpose of which was to bring a new breed from the most purebred Siberian Siberian. In 1934 was breed standard was developed, which subsequently introduced some changes. Today’s shiba inu are different from those that have been popular in Japan in the past. So, before shiba inu could have hanging ears and tail, white or fawn. In the Standard, approved in 1993, such signs are designated as defects.

Dogs of this breed are very active, fearless and hardy. Also they do not need constant caress of the owner. They have everything own opinion, therefore, the education of Shiba Inu should begin with the moment the dog appears in the house. High-handed Siba often try to show themselves masters of the house, so they can’t indulge. They are loyally love the owner, are loyal to family members, but rarely show a desire for constant communication. Shiba, like many others hunting dogs, like to be alone, sentiments are not their element. The stubbornness of shiba inu dogs sometimes makes the process difficult training, so the owner must timely find an approach to to the animal. One of the characteristics of Shiba Inu is a zealous attitude to everything that in the understanding of the animal belongs to him. These dogs get along badly with other pets (especially dogs), poorly tolerated when the owner caresses and is involved in bringing up someone else. Shiba-inu belong to strangers wary of potentially dangerous enemies, but never showing cowardice. They do not belong to animals that are ready let everyone into your soul in a row. In other words, shiba – dogs with Shiba Inu, even at an early age, can stand up for yourself, the owner and the territory entrusted to him. They are beautiful guards and tireless hunters who know their worth. As the owner for Shiba Inu is suitable for a person who is lightweight and capable of devote enough time to walking and training the dog.

Caring for Shiba Inu is not difficult. Small animal size, so you can select a corner for his stay as in apartment, and in an open-air cage (in the presence of insulated booths). They get used to temperature fluctuations quite well if not about critical mercury levels. Shiba Inu is enough clean, require simple wool care procedures, claws and ears, prophylaxis parasites. Thick Siberian wool should be combed out (several times a week), especially during molting (daily). Monthly show dogs are bathed, while animals whose calling – to guard the house, as a rule, they take water procedures no more than 2 or 3 times a year. Dog claws should be trimmed 1 or 2 once a month on your own with a clipper or at the pet salon. The ears of the dog should be cleaned 1-2 times a week gently, with a cotton pad swab or disc. It is advisable to purchase a spray for cleaning your ears, dissolving sulfur in the dog’s ear, so the process will go faster and easier. Shiba Inu food should include foods which will give the dog all the necessary vitamins and minerals. Be then natural food or industrial feed, the owner should always give preference to a quality product. When siba eats food prepared by the owner should be taken care that there was no fatty meat, smoked meats, sugar, potatoes, legumes, bones, a large amount of salt. Ready-made feeds are convenient for the owner, but useful for the dog when it comes to class products premium and super premium. Mixed nutrition is highly undesirable as and feeding food from the table. And the main point of keeping Shiba Inu is it is a must and long walk in the fresh air every day in any weather. Dogs of this breed lead an active lifestyle, they need movement. Often owners combine business with pleasure useful – ride a bike, holding the dog on a leash. Such The exercise heals both the person and the dog. If Siba is acquired to participate in the hunt, you can start forays on six months nature – there the dog will be expanse. In the city, do not letting the dog off the leash because shiba inu is a hunter with all the consequences that could really be dangerous for animals and people, especially if they are allowed in training spaces.

Dog training should begin with its early socialization. Shiba Inu must be taught the rules of good canine since childhood behavior: do not shit in the apartment (or in the strictly reserved for this place), do not beg for food from the table, do not encroach on the lives of others pets and calmly respond to animals while walking, don’t bother the owner and listen to his commands implicitly. Trained a dog – one that does not force the owner and other household members to live exclusively in her interests. Shiba Inu puppy from an early age you need to accustom to your own nickname, behave calmly with the animal and moderately strictly. Do not raise your voice and beat the dog. But such the breed should not be over-coaxed even after successful command execution. It is enough to praise the dog verbally, only sometimes giving a treat. And you should never allow unreasonable Shiba Inu aggression towards people and animals, the dog must receive punishment, which may be a minor physical exposure and the corresponding situation of voice intonation. Shiba Inu must be accustomed to a leash, collar and muzzle from an early age age to avoid tragic situations. Experienced dog owners advise in no case be limited to home schooling, but take the main training course with the dog yourself (you can study relevant literature, there are a lot of video tutorials on the Internet on this topic) or consult a specialist. General training course allows you to train (or improve data at an early age skills) the dog to such teams: “To me”, “Sit”, “Near”, “Walk”, “Stand”, “Lie”, “Aport”, “Fas” and others. Dog should be adapted to life in society, calmly respond to sounds shots, signals, noise. It is advisable to resort to help training instructors because shiba inu is very wayward. It’s easy for the owner to make a mistake when training. But the original training simple teams still need to produce independently to establish contact with the animal.

Shiba Inu are quite healthy and physically strong dogs. In rare cases, they are prone to hip dysplasia, which at an early age just calculate upon examination by a veterinarian and x-ray examination. Shiba Inu is sometimes found genetic disorder – von Willebrand disease (pseudohemophilia), which is characterized by poor blood coagulation. One more of ailments that can significantly degrade the quality of life of a dog – hypothyroidism associated with thyroid disorders. In rare cases of Shiba Inu may suffer from eye diseases (cataracts, keratitis, retinal atrophy). Puppies acquired in a good kennel having healthy parents and good heredity, and confirming this documents rarely get sick. Their immune system is strong enough hereditary diseases can always be identified by knowing the parents dogs. Buying a puppy from an unscrupulous seller is fraught the acquisition of an unhealthy animal in whose health you have to invest a lot of effort and money.