American researchers have found how bats hunt. Animals find prey in the dark with echolocation.

For a long time it was believed that bats could not detect still small objects like insects. Hunting process happens like this: animals emit sound waves that, being reflected, they inform about the position of objects around. Echolocation It is used both for navigation and for detecting prey. However leaves can mirror the signal and insects remain disguised. The secret is in choosing the right angle. Leaves act like mirrors when sound waves fall on them at an angle of 30 degrees and less. To detect small prey, animals you need to scan the leaves at an angle of 42 to 78 degrees. 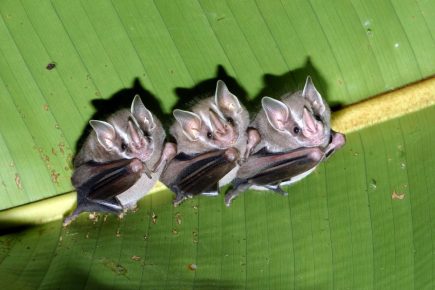 The diet of leafy plants includes insects, fruit pulp, nectar and pollen, many species are omnivores

As it turned out, winged hunters often use this by the reception. While studying the behavior of leaf-bearing bats it turned out that in 80% of cases they approach the leaves at angles in the specified range.