Australian echidnan biologists have done amazing discovery. It turns out these animals during the forest fires hibernate.

Last week, scientists photographed a echidna who visited the fire. The back of the animal became almost flat – all the needles burned out, only charred stumps remained. But in general, the animal was not injured. A natural shield of thorns protects the beast not only from predators, but also from the flame. 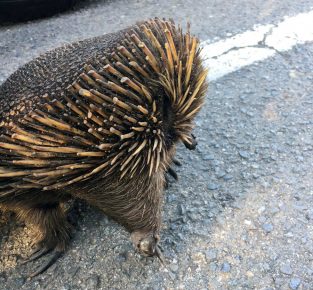 The thorns of the animal resemble hair, as they can grow back anew

Another important factor in salvation is sleep. Echidna during a fire burrows deeper into the ground, releases needles and falls into suspended animation. At it decreases body temperature and metabolic rate, respiration becomes slow – about three breaths per minute. Such a strategy allows the animal to survive almost any forest fire.