Another optical illusion is gaining popularity on the Internet. Web users cannot understand who is in front of them: a raven or rabbit?

The mysterious beast appeared on Twitter by Dan Quintana blogger. On at first glance it seems that someone is stroking the head of a raven. But if take a closer look, the picture changes, and now a person touches his nose black rabbit. 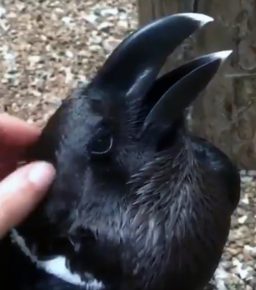 White-faced crows are very large, their body length is 50-56 cm

The blogger signed the post as follows: “Rabbits love when they stroking the nose. “However, the audience saw that it was still a bird – white-skinned raven. When his huge beak with a white end is open, it resembles rabbit ears. And the black shiny feathers look like fluffy hair.