In the US, prisoners were given the opportunity to communicate with cats from shelter and take care of them. From this it became better for both animals and to people.

Most shelter animals have a difficult fate – they had every reason to lose confidence in people, and therefore the chances of finding the new family is now small. Although these poor fellows need the most simple things: love, patience and care. All of this they can get thanks to the new program of American psychologists.

In turn, the prisoners received something that may not be had never before: they began to take care of living things, who give them sincere affection in return. Responsibility and gratitude are the strongest motivators for internal personality adjustment and they are already real work. 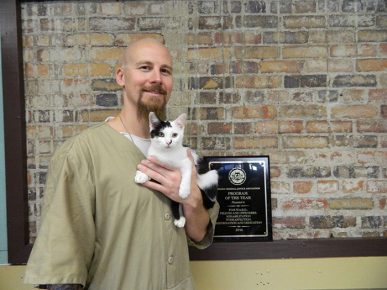 The organizers of the program note that in the experimental the penal colony has noticeably changed for the better moral and psychological situation, the level decreased as aggression and depression in prisoners. Care for the unfortunate animals made prisoners more collected and self-confident – this, according to scientists, is a very encouraging result.