Passers-by are no longer too surprised at such a meeting: by Vasilievsky island in St. Petersburg walks a hefty black pig. She lives near the promenade – at the Children’s the street.

Exotic pet appeared at Michael, a trainer for martial arts, unexpected for himself. By chance saw on Avito an ad for the sale of a cute pig and regretted baby – bought so that “he did not become a patty for someone.”

The little pig grew and grew into a hefty pig weighs more than a centner now. Michael called the beauty Varey and settled in the basement of the gym, where he conducts classes. Here, for the pig, ideal conditions are created, but she is not a homebody and often goes for a walk: show yourself, to people look. 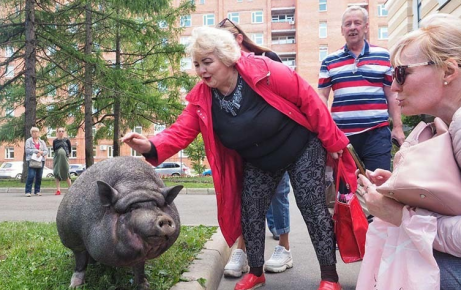 Barbara allows herself to be stroked, while maintaining a feeling self worth

Like all her fellow tribesmen – Vietnamese whiskers, Barbara loves to eat, she is smart, clean and for every reason has its own opinion. He does not tolerate familialism, too annoying strangers can even bite their feet – not much, just so that the girl is not bothered.