Leonberger – large dogs (height at the withers is from 65 to 80 cm, weight varies between 35-50 kg) of proportional addition, Muscular The birthplace of these animals is Germany, or rather, the small German city of Leonberg, which gave the name to the breed. Bred in mid-19th century leonberger, initially acquired farmers and pastoralists as assistants-trailers and security guards, but soon became popular as family dogs. Great character, powerful build, ability to quickly to study and diligently follow the master’s commands are just a few of the positive features of leonbergers that are perfect for ranks of a guide dog and rescuer. Leonberger distinguishes from many other breeds luxurious, long enough medium stiffness wool, with well developed undercoat. On the chest, neck, tail and extremities the coat is particularly long. Color of these dogs range from sandy yellow to ginger (dark and light shade), there is always a black mask on the face, small white marks may be on the chest and fingers. Head Leonberger massive, somewhat elongated, transition from forehead to muzzle well expressed. The back of the nose is elongated, wide, slightly convex, pigmentation of a large lobe black. The eyes are oval, dark or light brown. Ears are thick, hanging, set high. The bite of strong and developed jaws is scissor-shaped or straight. Medium neck, sturdy, without suspension, smoothly transforms into high withers. The chest is wide and deep. The body is long, wide, muscular, sloping in the croup. The stomach is picked up. Tail medium set, long. The limbs are straight, very strong and Muscular. When you look at the Leonberger, you can feel special dogs because of the open eyes of smart eyes, rather large dimensions and restrained, but friendly behavior towards people. This The German breed of dogs is loved by many breeders and in Russia already for almost 30 years. Whereas in Germany, Leonberger pleases people have been 170 years old, since 1846, when the breed was recognized. 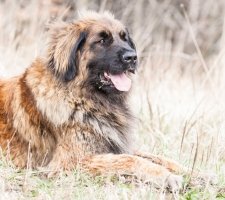 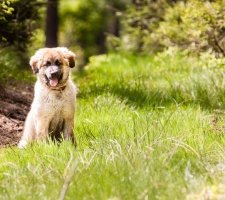 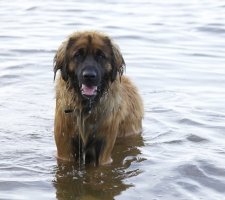 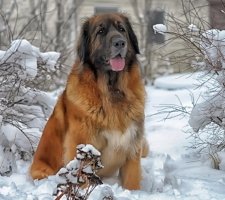 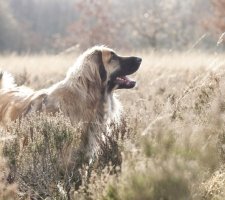 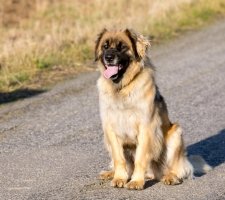 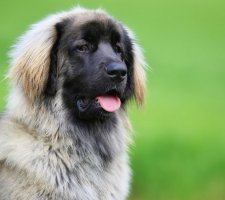 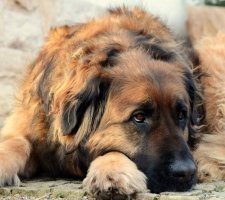 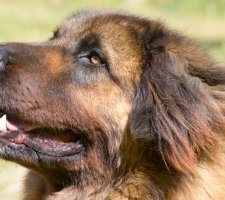 Photo of dogs of breed Leonberger |

The official version of the origin of the Leonberger is quite clear and is simple. The fact is that the symbol of Leonberg is a black lion, depicted on the emblem of the city. And the name “Leonberg” in translation in Russian it sounds like a “lion mountain” (or “mountain of a lion”). In the middle 19th century city councilman named Heinrich Essig (after part-time breeder and dog handler) decided to create a breed that will be a symbol of the city, therefore, similar to a lion. Throughout for several years he conducted breeding work, crossing St. Bernards and Landseer (black and white Newfoundlands). Then to work were attracted snow-white mountain Pyrenean dogs. Puppies born from such unions, subsequently participated in inbreeding – closely related crossing. So in 1846 Herr Essig achieved that the city of Leonberg acquired its own living symbol – a large dog of a majestic nature with a black mask on its face (colors then ranged from light-pinto, red to white shades). Another version to the nines refutes the above. Firstly, Essig did not keep archives, therefore, all the evidence breeds involved in the formation of leonberger are only stories of contemporaries, overgrown with legends. Secondly, the official version says that by the same St. Bernard, who the first was brought to cross, was a dog named Barry from local monastery. But Barry’s scarecrow, kept in the city’s museum, was made from an animal that died back in 1812, and Herr Essig was born in 1908. So Barry wasn’t forefather of the Leonberger. The same version says leonberger dogs living in Germany almost from the middle ages. Supposedly large shepherd dogs lived on the territory of Leonberg for a long time, also called Leonberger, by the 19th century practically disappeared. And the visionary G. Essig only carried out work on recreation of the breed, finding a specimen of an ancient leonberger, tide to it Landseer blood, St. Bernards, Hovawarts, large Swiss mountain dogs. Be that as it may, G. Essig made for the Leonberger quite a lot. Did he create the breed according to his plan or did he save it already available. It is known that both World Wars significantly influenced the number of leonberger. And every time I had to spend difficult work, so that the Leonberger did not disappear from the face of the earth, becoming as ephemeral as a lion – a symbol of the city of Leonberg.

Leonbergers are most often purchased as family dogs, guarding plots of private or country houses. And it is them with ease can be called perhaps the best among watchdogs breeds due to such qualities:

Most breed lovers note in Leonberger congenital love for children, the master and even a stranger. At an early age dogs this breed is very playful, but about a year and a half become restrained, but they love games with kids until they are old. These dogs very smart, even rather wise. Unlike most breeds, they can make friends with other owner’s favorites without experiencing this feelings of jealousy. They do not try to dominate, putting themselves higher than the owner, which allows even a person to train such a dog without steel character. Leonbergers may be mistrustful to the offender, so you can never scream and beat them. These animals by nature very highly developed mentally, so that a strict voice and some host coldness after misconduct – sufficient punishment for them. Powerful and hardy from nature, Leonberger to venerable age in need of reasonable physical exertion. Although if necessary, they can also adapt to the calm lifestyle of the family. However, keep them safe in the apartment or in the yard on chain not recommended.

Leonberger can live in an apartment, and in a courtyard aviary. However, when it is not recommended to keep them tethered or to close the doors of their home so that the dog does not have the opportunity wander around the site. They need to communicate with people, because the owner and his family members are the friends of Leonberger that he needs. These animals are insensitive to natural whims – thick coat protects from overheating and from cold. Care for Leonberger will require some physical attachments from the host. Wool should comb out several times a week with the help of a finisher or brushes, slicker for long-haired dogs. Neglect of procedure combing threatens with inflammation of the skin, and also favors flea infestations. They bathe Leonberger twice a year, during periods molting, hypothermia should be avoided during the procedure. After washing the dog must be thoroughly dried and combed. ears require attention (clean with a damp cotton swab once or twice a week) eyes, teeth of a dog. Eye and mouth cleansing procedures should ideally carried out every day. Leonberger Claws Cut with a nail clipper twice a month. Suitable for walking long, moderate active releases twice a day by 1.5 – 2 hours. If there is a training ground near the owner’s house, then the Leonberger will gladly execute the master’s commands, frolic with tailed friends (puppies who have not been vaccinated against contact with other animals must be isolated). In summer time the owner can safely take a pet to a pond, river or other body of water, as leonberger are great swimmers. After water procedures the dog should be carefully inspected and rinsed at home water. The nutrition of Leonberger is no different from the diet of other large dogs. It can be a natural diet (meat, offal, fish, vegetables, cereals, cottage cheese + vitamins) or ready-made high-quality feed for giant and large breeds. Since already lenders Leonberger large enough, the owners, wishing only good, try them feed, add more food to the bowl. Such an approach is fraught with obesity, and then other health problems. The best thing consult a veterinarian or breeder about nutrition the breed from which the dog was purchased.

In some cases, a puppy from the kennel is enough adapted to life in society, but even a change of residence the calmest and most fun kids Leonberger able to cause fear and depression. The main task of the owner of the puppy is to help little creature to cope with all difficulties and become a friend tailed pet. When the puppy gets used to the house, family members you can start learning the first, simplest commands (“to me “,” lying “,” place “, etc.). By about 5-6 months (sometimes sooner or later) with the puppy you can go through OKD (General course training). Sometimes the owner himself can train the dog, but in in some cases, when experience is not enough, you can turn to to the instructor. In some cases, Leonberger watchmen after passing OKD can be bailed to specialists for passing ZKS (Protective course of dog training). Is it necessary – to decide the owner. After all, as a rule, these dogs are enough obedient and non-conflict, executive and not distinguished by increased anger. They will not allow the attacker to go to the site (or to the house), but they will not tear him to pieces, but will keep him “on the sights” until he arrives the owner.

The owners are pleased with their active behavior and good health. animals all their lives – 9-12 years. Major weaknesses for they are the same diseases that are characteristic of most large dogs: