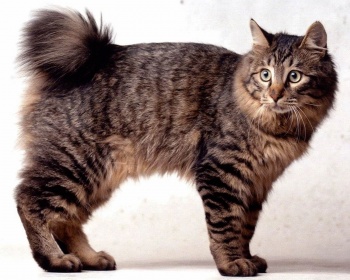 Karelian Bobtail (not to be confused with Kurilsky) – tailless breed Cats come from Russia. Traditionally their place of residence is Karelian Isthmus, and for the first time they were noticed by a person in the area Lake Ladoga. Yes, you understood correctly – they were not brought out by any breeders, these cats are aboriginal and possess ancient history of origin.

Until now, no one can say exactly when it appeared bobtail on the territory of the Karelian Isthmus and in other adjacent areas, but, scientists speculate that for many centuries back their closest relatives could be Norwegian forest cats. Somehow in the process of development and resettlement for new territories, Norwegian came to the territory of modern Russia, or then Kievan Rus.

The short tail gene is dominant, and originated among cats, living in this territory, spontaneously, it is not known exactly when. It was transmitted also, spontaneously, and still cats with tails about 5 centimeters long, can be found in local settlements. In fact, the Karelian Bobtail breed is enough rare, and if not for the locals and their beliefs, according to which a cat with a short tail brings happiness to the house, there would be significantly less. Moreover, according to some specialists, they could completely disappear.

Tribal Commission KLK “Kotofey” took up the creation of the first Karelian Bobtail breed standard in 1987. For this were cats were taken from the cattery Liliya Dvoryaninovich. Unfortunately, at the time recognition in the World Cat Federation, the cattery Dvoryanovich is no longer existed, and by the mid-2000s not a single one was alive cats from this cattery. Now there are only 2 breeding nurseries – “North-western Sky” in Karelia, and Kotofey KLK (although this is not specialized breeding nursery, he is engaged in breeding and these cats).

Karelian Bobtail is an ancient cat with a rich history and the inner world, which is fully consistent with this wealth. This breed is perfect for large families, and for single owners, she will feel great in the apartment, and in a private house. Flexible, kind character, mind and expressive looks make this pet a great companion.

Karelian bobtail has a medium-sized body, medium-sized paws lengths, ears also medium. The muzzle is wedge-shaped, eyes large, rounded. The tail is never straight and rarely reaches length more than 10 cm. There are many colors, although not all possible shades and combinations of patterns. By the way, the length of the coat can vary and she has an undercoat. Average duration life is 15-18 years.

Karelian bobtail – a kind and affectionate cat. Apparently not in vain locals love these animals so much – centuries-old beliefs on an empty place are not born. Karelian tailless cats have very balanced and soft character, they perfectly find a common language with a person, they understand well what is required of them. Also, these pets feel good mood and emotional state the owner, and try to support their affection and even just his presence at a difficult moment.

Karelian Bobtail cat has a very sharp, developed mind, opens doors and simple latches, understands when about her they say, and in general – gives the impression of a rational being. Have a large supply of internal energy, like various types of activity, games, if a cat lives in an apartment, she needs toys and own corner. They get along well with children, love with them play.

These cats are very curious, they are interested in exploring the world around you, and if you live in the private sector, consider this moment. They say that Karelian bobtail in the past swam well, and that even now it can be observed in those very surroundings Ladoga Lake, and who knows – maybe your pet is really will swim. Especially considering the fact that Norwegian forest cats, the closest relatives of Karelian bobtail, do it from time immemorial.

In general, the Karelian bobtail is a healthy cat, and the gene of short tail, does not cause serious complications in other systems organism. Also, it is necessary to take into account the fact that the number standardized individuals of the breed is extremely small, and therefore deep There are no studies to date.

The hair of these cats needs regular weekly combing, you need to bathe them about once every 2-3 months. Claws cut on average once every 10 days. Be sure to clean your eyes cats from deposits daily, ears are cleaned twice a week. Also, a good solution is to brush your teeth 3 times a week.