Who said white dogs are the funniest? Any owner The Irish Setter will dispute this claim. These redheads dogs are not only funny and energetic, but also very smart. If you spend a few hours with a dog of this breed, then make sure that the irish setter is a great companion dog. is he friendly and affectionate with his master. Originally an irish setter was bred as a hunting dog, therefore, it has been preserved in it today tremendous energy and enthusiasm of a hunting dog. For this pet there is nothing better than learning everything new: new places, especially everything about birds. Even if the dog never went out the field, yet her hunting instinct is very strong. Main object the hunts of these dogs are birds. Despite the fact that the Irish setter very gentle and loving, such a pet is not suitable for everyone. It is very active, so every day an animal needs at least hours of active exercise. The territory of the courtyard where the dog walks, must be fenced. Dogs of this breed often develop fear separation, which can lead to a stressful situation. Special this often happens in dogs that are often left alone At home, it is customary to divide the Irish setters into two groups: show dogs and field dogs. Show setters are slightly larger and heavier than field ones. Also, these dogs have a thicker coat. Both varieties fully comply with the official standard breeds. Irish setters are considered to be comprehensively developed animals. They are successful in many activities, in including obedience, search, agility. The special temperament of these animals caused the use of setters in canine therapy. Overseas representatives of the breed become frequent guests hospices, nursing homes, shelters, etc. Irish Setters famous for their intelligence. Moreover, they differ in a special mischief and an independent character. Such qualities become the reason for the need for great patience on the part of the owner in dog training. The Irish Setter can act like puppy, in terms of mischief, for several years. Not surprising, that these dogs are especially popular among middle and older children age. But communication with the kids is better to limit. Dog is very active and can cause harm to the child. The Irish Setter is one of beloved dogs of world stars, presidents and ordinary people. Millions admire this dog. She will become a reliable companion for long years of life.

Photo of the Irish Setter: 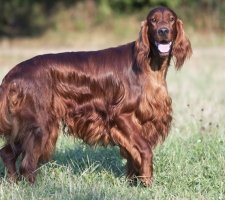 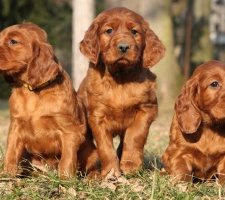 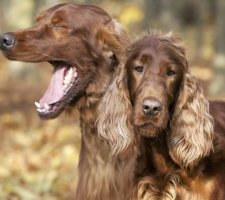 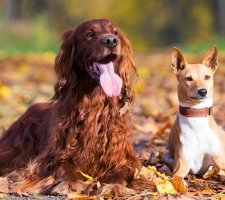 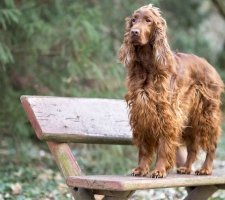 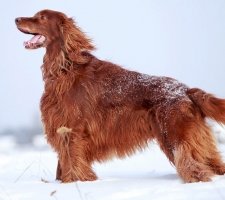 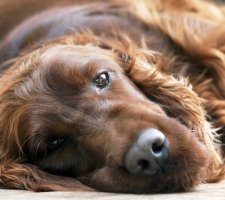 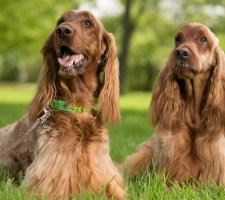 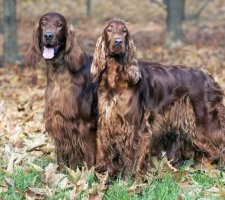 Photo of the breed Irish Setter |

It’s not surprising that this red-haired handsome man comes from Ireland – the land, which is famous for its graceful and beautiful dogs. Likely, The Irish Setter was bred in the 18th century, possibly as a result of crosses of setters, spaniels and pointers. First irish setters were called red spaniels. Although quite often Setters are found not red, but a white-red color. Meet also setters with solid red hair, which are noticeable small white blotches. In the nineteenth century most Irish breeders tried to breed purely red dogs. It was believed that this color is the norm. Irish setter quickly gained popularity among dog breeders. In the end nineteenth century representatives of this breed were practically permanent winners at various exhibitions and competitions. The peak of the popularity of the Irish setter came in the 1960s – 1970s years. All thanks to books and movies in which the Irish Setter was the main character. An important role was played by the fact that in the administration President Nixon also lived an Irish setter. Today this breed takes 68th place among 155 registered American club.

The Irish Setter was bred specifically for bird hunting. Today these dogs are rarely attracted to hunting, but from this energy and the strength of the animals has not diminished. Regardless of the variety, the irish setter must be friendly, that quality is an obligatory character trait of dogs of this breed. They are excellent Suitable for families who lead an active lifestyle. Perfectly get along with children, love people and show affection for other household to animals. Irish Setter strives to become a full member families. Despite the fact that these dogs are usually fine educated, yet they often jump on guests, showing, thus way, your attention and joy. Also representatives of this breed are good watchmen. They will always let you know about imminent danger.

The wool of the Irish setter must be combed out every other day. it extremely important not only in order to maintain coat healthy, but also to prevent the formation of spools and spreading dead hair around the house and furniture. Bathing this dog breed only a couple of times a year, and then, in case the pet is strong get dirty. The long hanging ears of the Irish Setter don’t allow air circulate in the auricles. Often this leads to the formation of ear infections. Check your ears weekly for the presence of inflammation and infection, irritation. Ears must be cleaned with a special swab, after consulting with by a veterinarian to remove tartar and prevent damage gums, as well as the formation of an unpleasant odor, you should brush your teeth setter every day.

Irish setters do not need special training when it comes to about bird hunting. What can not be said about obedience in everyday life. Not worth it rely on the resemblance to a golden retriever, because it’s completely different animals. Training the Irish Setter requires special patience, calm and perseverance. Animals are stubborn enough. Training must begin at a very young age. Setters can be very noisy even if you walked with him all day. The fact is that they like to jump, including people. Your the task is to teach the animal the right manners.