Residents of Penza have already managed to get used to lively attractions of his city – a tiger cub, which the guy walks through the streets on leash like a dog. But now this strange couple is already walking in another city.

The one and a half year old tigress is called Aurora, she is not a circus actress, but just a pet. When Aurora was completely small, Ilya Goryachev saved her life, and then could not part with this affectionate tabby cat.

A tiger cub was born in the Penza Zoo, but he was sick and weak, and his mother refused to feed him – as often happens. Without special hope for success, the staff offered to care for the baby Ilya, who already had experience in raising various animals. The guy managed to feed and cure a tiger cub, and then bought him at the zoo. 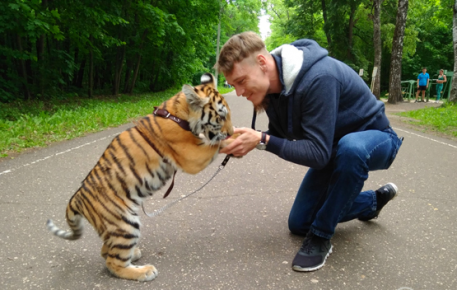 Law prohibiting the acquisition of wild animals for home enters in force only from next year, so that claims from law enforcement does not arise. Especially since all the documents in Aurora in order. But people on the street often shy away.

While the tigress was growing up, she had to change places more than once residence: Ilya moved from Penza first to Novorossiysk, and then bought a private house in Saratov, where he equipped a comfortable aviary for your favorite.