During a flood in the Indian state of Assam from the national Park tiger escaped. She decided to stop at the local resident.

Monsoon rains occur in July throughout India. it became a flood. It claimed the lives of nearly a hundred animals. But ours not one of them – in the struggle for life she left the flooded Kazirang Park and began to look for a safe place. As a refuge the animal chose a private home. The owner immediately left him together with relatives, frightened by the beast, and reported the incident to the police. The tired tigress, meanwhile, took the bed of the master of the house and fell asleep. 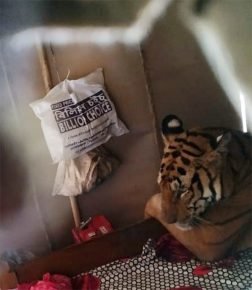 According to lifeguard Ratin Barman, she slept all day. The police still managed to wake the animal, using in the yard home firecrackers. Rested and full of strength, the tigress left a hospitable house and went to their native element – the jungle.