Crocodiles lurked on the streets of the Indian city of Vadodara. They ready to attack at any time – so far only at home animals.

Heavy rains are a common occurrence for this time of year. West India. As a result of natural disaster, the streets of some cities were flooded, and on them from the nearest rivers became crocodiles make their way. Special Rescue Units services catch reptiles, take them to a safe distance from settlements and release there.

The city of Vadodara was flooded by the muddy waters of the Viswamitri River. The author of the video managed to capture the moment when the crocodile steals up to a medium sized dog and tries to grab onto her hind leg. Squealing, the dog dodges and runs back to a couple of meters – but it seems not too surprised. 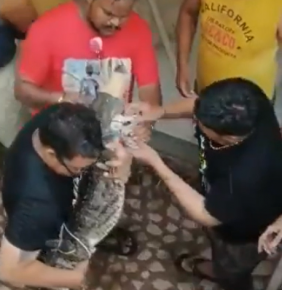 Rescuers quickly caught the aggressor – a young small crocodile – and kicked him out of the city.