A resident of the Smolensk region went to the forest for mushrooms, and returned with wild piggy strayed from parents. Victor Novikov called orphan Masha and fed from a bottle.

Eleven years have passed since then. In the village of Red already ceased to be amazed at the fellow villager who is fumbling with the pig as with a pet, and not feed cattle for slaughter like this normal people do.

And Viktor Novikov loves the animal he saved and spoils him in every way. Masha reciprocates, she always greets the owner with joyful grunts and begs him goodies – especially likes caramel candies. The boar is very made friends with a yard dog and even learns to guard from that house. 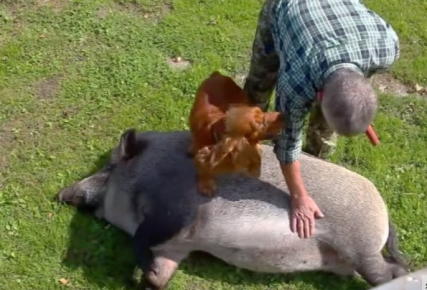 Having learned about an amazing pet, they rushed into the village television people, and Masha became a popular personality not only in home village.

Video: Masha and her master