In Dzerzhinsk, Belarus, an amazing accident happened. Driver crashed into a residential building, trying to go round the hedgehog.

The accident occurred on the night of August 30 to 31. About 2 hours at midnight, a 24-year-old motorist driving an SUV, drove into the house. Luckily there were no casualties – only the building was damaged. According to police, the driver was sober. He lost control because of his love for animals – on the road a man noticed a hedgehog and tried to save him from death under wheels. A sharp turn failed, as a result, the car flew from carriageway crashing into a wall of a house. Despite this, the driver he achieved what he wanted – the hedgehog remained safe and sound. 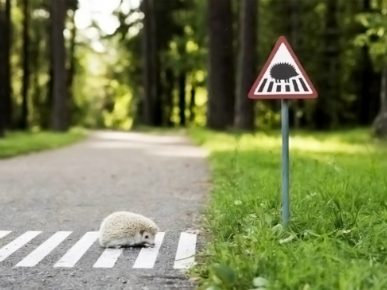 Hedgehogs very often die under the wheels of cars, so in 2019 in the UK even introduced warning traffic signs in places where animals are the most