In an ordinary Penza apartment, an adult male cougar lives. Him his name is Messi, and he radically changed the life of his masters.

A year and a half ago, Alexander and Maria Dmitrievs drove on business in Saransk and went to the local zoo. And there they drew attention to sick sad coup. Messi was then eight months old and zoo employees doubted that he would survive.

Sasha always dreamed of a big cat, at least about Maine Coon. And so fate must have a chance for both of them, man and a dying animal. AT the zoo willingly sold the teenager cougars – got rid of the burden. The treatment was long and difficult, but Messi, to spite everyone predicted, survived and recovered. True, due to illness he is not grew too big – weighs forty kilograms with standard for of this kind of sixty. But in his situation this is more a plus than minus.

He gets along well with people and animals. Successfully completed the general course training on the site for dogs. But Sasha and Masha had to change the mode of your life and even change the atmosphere in apartment. 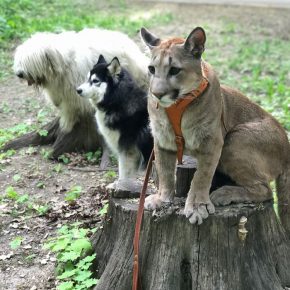