Three months ago appeared in Kharkov public transport unusual ads – inconsolable owners are asking to return them a lost cat for a reward of $ 400. In social networks heated discussion broke out: someone sympathizes with the owners, and someone declares them deceivers.

Numerous ads report that the cat has disappeared, outbred and sterilized: they say, there’s no profit from it, but the seeker is offered a substantial reward of ten thousand hryvnia is about four hundred dollars at the rate. 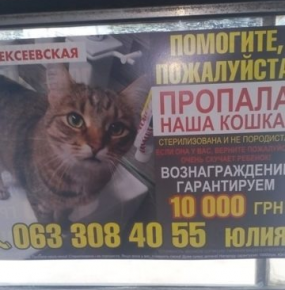 Requests for help are also distributed on social networks, however vigilant users immediately began to expose the “cunning” the hosts. Signs of dear are seen in the striped loss breeds: either Bengal or Serengeti, the cost of which may reach three thousand dollars. True lovers claim that the authors text trying to save in this way. And few people come to the head that the owners just love their pet and really want bring her home.