In July of this year, a scandal erupted in the Irkutsk region around equestrian asian kok boru competitions. Residents of the village of Khomutovo filed a complaint with the police and prosecutors for ill-treatment with animals, in particular horses.

The local Kyrgyz community spends in the fields every week nearby Chomutovo spectacular equestrian competitions kok-boru, in which horses are often seriously injured and even die.

Kok-boru – a team game for men, popular among modern Kirghiz and inherited from the ancient nomads. Essence national fun, a bit like the famous polo, in that rivals riding on stallions tend to take possession of the “shell” (carcasses of a goat or a calf slaughtered on the eve) and drag it into tai-kazan – conditional gate of the enemy.

In the excitement of competition, inevitably a bustle occurs, and horses can severely crippled, which was repeatedly observed by local residents. They convinced that the animals involved in kok-boru are potential suicide bombers, and demand action. 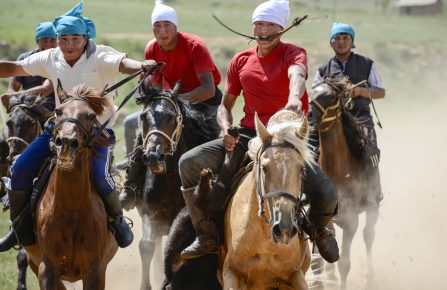 Law enforcement officers have to figure out whether organizers of strict game rules designed to protect as much as possible from injuries to both horses and the riders themselves. Kok Boru is included to the regulations of the World Nomad Games, and the rules adopted here should strictly observed. The game is also listed. UNESCO Intangible Cultural Heritage.