Noble East European Shepherd Dogs are the brainchild of Soviet breeders, the main idea of creating the breed was to create such a dog for service in the army, which will be hardy, feeling comfortable in difficult climatic conditions. East European Shepherd dogs are also bred as guide dogs, the guards of the territory. A calm disposition and endurance allow these dogs to be great friends of a person – they are faithful, adequate. Appearance of dogs of the breed East European Shepherd for a long time known to ordinary people since the days of the USSR, since they are often act in films and series (“Come to me, Mukhtar!”, “Border Dog Scarlet “and others.) These dogs have, as a rule, a characteristic black color (black-gray, black-fawn), less often – black. Musculature dogs are strong, their head is massive (according to the composition), neck muscular They stand out with a rather wide elongated back and the pelvis. The loin is slightly inclined towards the tail, which has saber shape. East european shepherd has muscular shoulders and hips, as well as long straight forelegs and drawn back set. The hair of dogs of this breed is tough, elongated on the back and hips and shortened on the ears, paws, muzzle. Male growth is 66-76 cm, bitches are 62-72 cm, females are appearance and muscles are much smaller than the opposite sex. The weight of males is about 35-60 kg, bitches – 30-50 kg.

Photo of the East European Shepherd: 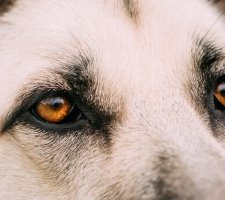 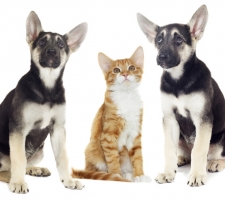 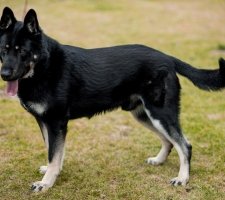 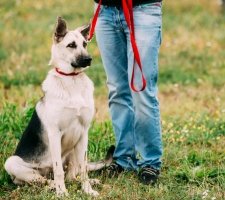 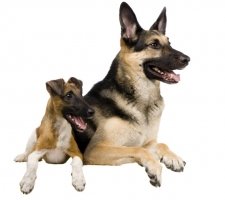 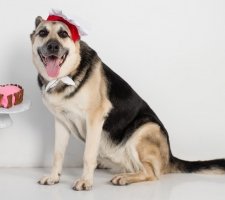 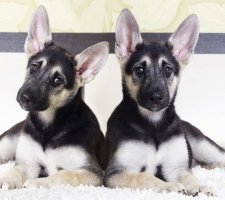 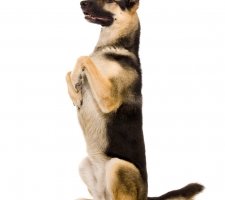 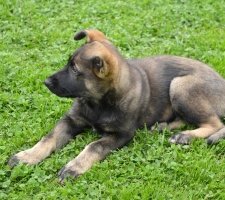 It is not for nothing that the East European Shepherd is confused with German, because these two breeds are inextricably linked with each other. Since the mid 20’s years of the 20th century, German shepherds began to be imported into the territory of the USSR, characterized by a balanced character, able to carry out commands even a stranger. Such qualities of a German shepherd conditioned by their obedience in the process of training. It’s not surprising that such dogs were ideal for guard and border service, detective. Since the 1930s, active work on breeding a new breed adapted to climatic Union conditions, but retaining the best qualities of German shepherds. The first breed standard was approved in 1964 by the Dog Training Council of the Ministry of Agriculture of the USSR. The breed is recognized by the Russian Cynological Federation (RKF), International Union of Kennel Clubs (UCI), International Canine Union (ISS), but not recognized until now since the International Cynological Federation (like some others breeds bred in our country).

When trained properly, the East European Shepherd Dog is good-natured relate to members of their family. They are playful, obedient and very smart. However, to strangers and people who seem suspicious to them, shepherd dogs They are wary and unfriendly. They are wonderful watchmen. territories entrusted to them, protect the house and its owners. These dogs are tolerant of other animals. It seems that the east european shepherd dogs are endowed with a special intelligence, so there is a lot of mind and self-esteem in their eyes. How as a rule, those people who have dealt with dogs of this breed, never forget them. These dogs are smart, obedient, kind. Given human warmth always remains in their memory. Despite their loyalty, East European Shepherds still set aside for themselves one leader they always love East European Shepherd is balanced decisions, they are rarely subject to instincts, come to the fore analysis of ongoing activities and the severity of what is happening. Pets living with a dog of this breed do not subject to hunting and abuse from East European Shepherd Dog. These dogs are not uncontrollable. machines for attacks on all living things. But on occasion they are always ready to attack.

East European Shepherd Dog does not require special care, it should bathe the dog as it gets dirty, about 5-6 times a year. Wherein should use shampoos that will not harm the animal, then eat from the pet store. It is desirable to carry out combing at least 2 once a week, which implies the presence of special brushes. East European Shepherd Dogs can be kept both in the apartment and and on the street. In the latter case, the owner must provide the dog warm housing, eliminate the possibility of colds and hypothermia. These dogs even at a considerable age are quite playful and mobile, therefore they do not miss the opportunity to run and frolic with the owner. Provide them with the availability of toys, as well as the opportunity daily (at least two-time) promenade.

East European Shepherd Dogs are highly trained, obedient. Them the main advantage in training is that they perceive teams not only a person close to them, but also an outsider. Generally trained dogs are rigorously carry out the orders given to them. Such qualities have made them so attractive as service dogs. Always to the fore East European Shepherd Dogs have a task, and only then go own ambitions go on. It is advisable to train the dog elementary teams from an early age, which will allow her to become disciplined and obedient. Training should be daily (at least an hour). They must pass on special areas where the dog can turn around. As methods forcing the east european shepherd to complete tasks the owner, as a rule, use encouragement and coercion. Trained dogs listen to words throughout their lives person.

Generally, at a young age, East European Shepherd Dogs pretty strong. Timely vaccination against plague, enteritis and rabies is necessary not only for animals of this breed, but also for others. East European Shepherd Dogs are quite sturdy health, but the most common diseases they have inversion of the stomach and arthritis (arthrosis). If the animal is behaving restlessly, his stomach is enlarged, the front and hind legs, there are prerequisites for vomiting, the owner has all reasons to suspect in an animal an inversion of the stomach. Should contact your veterinarian immediately for help, as inaction will inevitably lead to the death of the dog. Stomach inversion requires immediate medical attention. Arthritis or arthrosis in east european shepherds is common in the elderly age. Overweight of an animal affects the development of the disease. The owner should be careful about the dog that has become indifferent. The changed gait of the animal, limping should alert the owner. It is worth remembering that joint treatment most often consists in relieving pain, whereas It is sometimes impossible to cure a disease. Treatment and prevention fleas and worms in East European Shepherds are a must condition of their content. Bloodsuckers not only annoy the dog, but also threaten the development of serious diseases. Feeding these dogs must be balanced. To do this follows choose a diet that will include healthy substances and minerals. East European Shepherds are very fond of natural food, with pleasure eat dairy and meat products. In no case should you overfeed the dog, give indigestible foods (bones, especially sharp ones). In those In cases when the dog eats ready-made dry food, it should be especially clearly monitor the presence of clean water in her bowl. One-time feeding can lead to an inversion of the stomach and other digestion problems.