English cocker spaniels first became known at the beginning of XX centuries, and work on their breeding began in the 1880s. From the name It’s clear that England is the birthplace of English cockers. Often, however, English Cocker Spaniels are confused with their American brethren – these breeds are similar, but somewhat differ in exterior. English Cocker Calling – Girlfriend hunting for swamp and field game, although these dogs are fast enough adapt to almost any role. No wonder urban English cockers are turned on as companion dogs, which not surprising given their good natured, healthy curiosity and a high degree of coping with other pets. These animals perfectly train, can even be brought inexperienced owners. Unpretentious in care, can live as in a street aviary, and in a small city apartment – their good endurance and modest dimensions allow it (dog weight is from 12.5 to 15 kg, height – 38-41 cm). English cocker spaniels are wonderful companions of man, meeting almost every desire of the potential owner – they are ready to hunt without damaging prey, affectionate and playful, able to adapt to the mood of the owner. hallmarks of english cocker spaniels – long hanging ears adorned with wavy hair, well-muscled muscles, large paws that allow you to get trophies during the hunt from the water. Head English cockers domed, medium sized, transition from forehead to muzzle smooth, well defined. Eyes predominantly dark brown, oval, with a tight adjacent eyelids. Ears low set, long, close to the head is tight, which does not negatively affect the quality of hearing animal. The nose is moderately large, dark, crowning enough elongated muzzle (unlike the American cockers, the British have a muzzle cannot be shortened). Bite of strong developed jaws scissor-shaped. The neck is quite long, muscular. Strong the body is moderately short, straight, convex in the lumbar region, chest deep, belly tightened. The limbs are bony developed muscles, paws are large, with large size with your fingers. The tail is set slightly below the level of the back, most often docked. The coat of English Cocker Spaniels is long (sometimes curly) on the limbs, ears and sides. Well developed undercoat. Shades of wool – black, brown, red, golden, black and white, red-white, brown-white (sometimes with tan or speckled). 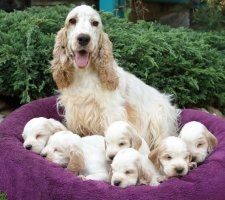 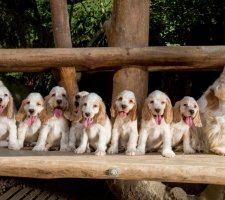 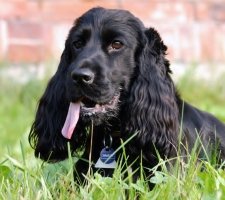 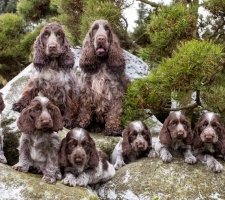 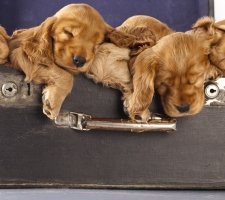 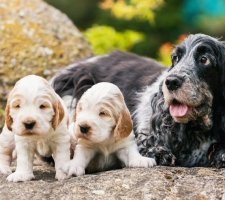 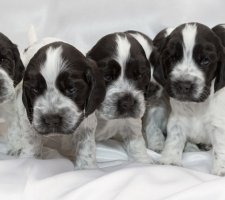 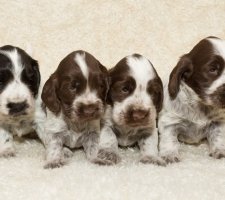 Despite the fact that the breed was bred in the British Isles, English cockers have to do with Spain. After all, this the country is considered to be the birthplace of spaniels. True, some scientists believe that long-haired hunting dogs appeared in Germany. Other experts attribute the origin of all spaniels Ancient Greece. Be that as it may, the main version of the occurrence spaniels is the one that these dogs formed precisely in Of Spain. Allegedly from there in due time in the Middle Ages dogs were exported to Ireland, and then they appeared in the UK. Interested in strong small dogs, the British decided with time to create your own national breed that can hunt practically in any conditions – in water, thickets, fields. Picture dogs similar to English cocker spaniels can be found on paintings of the XIV-XVII centuries, although before the official recognition of the breed at least two and a half hundred years must pass. Originally English breeders divided their spaniels into field and water. And only by the 19th century did breeders decide to create breed capable of hunting both land game and water game. So the breed of English cocker spaniels – hardy, was bred gambling in the hunt, but quite calm in the family circle of dogs. UK Kennel Club Approves English Cocker Spaniels in as a new breed back in 1893. And in 1902, the whole world learned about them when the first breed standard was approved. Soon the spread of English cockers has occurred in almost everything to the world. By the way, the word “cocker” has become a prefix to the name of the breed from English “woodcock”, which means “woodcock”. To Russia English cocker spaniels were introduced at the beginning of the 20th century, but popularity to them in our country has woken up relatively recently – in the 1970s. Moreover, the interest of buyers in the English cockers was not only due to hunting – many people liked these dogs and thanks to the classic appearance, and obedience, and relatively easy care for silky long hair. IN unlike american cocker the hero of this article is the best the hunter. American cockers were brought out more likely as decorative dogs that delight the owners.

A well-trained cocker spaniel has an excellent character. This affectionate dog loves to participate in all family events. The cocker is playful, alert and active. He loves any games and Exercises: from a regular walk to an active run. Cocker Spaniel known for his sensitivity, excellent mental and physical data. It has a soft character, but reacts to rough appeal. Sometimes such a reaction consists in a growl, but before that comes in extreme cases. In the period of early socialization, it is very important to teach the dog elementary norms of behavior. Socialization helps show your best qualities to the animal.

The coat of a cocker spaniel is different. Thick, sometimes wavy short coat adorns this dog. Color is most often monochrome. It can be black and light cream, and sometimes even reddish brown. There are spotted spaniels (two or more colors). Cocker Spaniels need intensive and systematic grooming. Most owners of these dogs prefer to resort to help. professionals who can not only brush their wool, but cut, buy a dog. This procedure is best. once every two months. Note that the cost of such services in different salons may be different. Many owners Cocker Spaniels prefer to cut their pets short. it allows you to facilitate the general care of the dog. But even then you’ll have to cut the dog’s hair and nails once every two months, and also thoroughly bathe the dog. Grooming in dogs of this breed should start immediately after reaching the coat of the appropriate size. Best accustomed to haircut and regular combing from early age. This will accustom the pet to the procedure from childhood. it as for clipping claws and brushing teeth. Try to teach dog to all hygiene procedures from the first days of appearance puppy in the house. Unfortunately, cocker spaniels are different their negative attitude to grooming. Therefore, the best Get extensive advice on this from your veterinarian. need to be trimmed every month, ears checked weekly. In while examining the ears, pay attention to the presence of irritations, inflammations, and any signs of infection that may manifest in unpleasant odor from the ears. This procedure has an important value, since cocker spaniels are prone to various ear diseases of an infectious nature. To prevent problems with ears you need to weekly treat your pet’s ears with a special solution. When feeding, tapered bowls must be used. This will prevent the ears from getting into food when eating. Also concerns and drinkers. Some cocker owners even put dogs on a leash with food to prevent ears from getting into food.

English Cocker Spaniels are easy to train, but the system training and learning should include rewards and praise. Cocker spaniels are very sensitive, so during training any rudeness and aggression should be completely ruled out. IN Otherwise, your lessons will fail. The best in training – this is the reward and praise of the animal for any, even insignificant, success. If baby cocker is acquired as a friend, the best option as a training would be passing the OKD course, during which the dog learns the commands: “near,” “place,” “to me,” “sitting,” “not allowed,” and others. Moreover natural qualities of English spaniels (in the field of training) are so well developed that the basics of training can teach them how professional and beginner. The main thing is not to show excessive caresses during classes. The dog who saw that the owner is set up too softly, it starts to either be stubborn, executing commands, or try to ignore the person’s words. As an encouragement during training use a calm and friendly tone (usually they say to the dog: “Well done!”) and a treat. Punish the dog at help strict tone of voice. In rare cases, the animal can be slightly hit the croup with a hand, twig, or newspaper without causing pain. Since the English Cocker Spaniels are hunters, after approximately 7-9 months of training for OKD the owner’s desire). Since childhood, these dogs are taken with them in time outings in nature. Since childhood, the spaniel will become accustomed to the terrain, where game hunting will take place in the future. Usually English cockers are used as assistants in the girlfriend hunting for upland, swamp, field and waterfowl. at first the animal can be accustomed to the sound of a hunting horn (sometimes a whistle), for example, serving food, accompanying the action with a signal. So dog not only will not be afraid of a characteristic sound, but will also understand when to approach the owner. Also from an early age pet they accustom to the development of intuition – they hide some object (a toy, treat) first on the lower shelves of the cabinet, under the bed, for example. Gradually, the task becomes more complicated – the desired thing lies higher and the windows open – so it’s harder for a dog to recognize exactly where it is desired. Gradually train the animal to catch a hollow (this bird is low flies and allows for periodic landings), ducks, pheasant, corncrake, snipe, quail, partridge. First, the dog should be given a sense of the smell of the bird, and then move away from it, indicating the right direction of her finding. These dogs tend to train quickly. basics of training, which allows them to become good hunters already at a young age.

The average life span of a cocker spaniel is 12-15 years old. The main health problems that may occur in cockers include: cardiovascular disease, disease musculoskeletal system, autoimmune, hematologic, immunological disorders and infectious diseases.