Bullmastiff is a very strong-willed dog that is not afraid of anything and always ready to give her life for her family. This sixty a kilogram pet will faithfully sit at your feet while you sleep protecting your sleep. The average weight of this big dog is about 41-60 kilograms. Bullmastiff devoted to his master and all family as a whole. He gets along well with children. Such a dog is rightfully considered one of the best family dogs. The main thing in education such a large dog as bullmastiff – early socialization and training. The pet must learn how to behave in certain situations. Despite the fact that the bullmastiff is not particularly active, nevertheless he succeeds in agility and successfully fulfills the role of therapist dogs. Representatives of this breed are very smart and fast. learn new things, but they don’t like long monotonous training. Bullmastiffs – belong to guard dogs, and successfully cope with this task. For their maintenance it is necessary well fenced yard. You should never let such a big dog walk freely on the street. The Bulmastiff does not get along well with others dogs, especially one gender. It is extremely difficult to contain bullmastiff – a dog with a male of another or the same breed. Even those dogs who have lived for years in peace and harmony can at one moment become irreconcilable enemies. Since this breed is very strongly developed hunting instinct, bullmastiffs get along badly with cats and others small animals. These giant dogs tend to salivate. Saliva is liberated liberally during eating, drinking, and physical exercises. Drooling is an integral characteristic of any bullmastiff. Dog breeders confidently argue that the more pet cheeks, the more saliva. To solve this problem you have to stock up on a towel and always keep it at to yourself. Despite its large size, the bullmastiff can be kept in apartment. True, only if you are willing to come to terms with certain crowding. Bullmastiffs do not need active exercises. As for grooming, you have to comb the dog a couple of times a week. This will be enough to maintain the coat in good condition and preventing the spread of wool around the house. It is worth remembering the need to control the condition of the ears, as well as claw trimming. Bullmastiff refers to those dogs that form a close relationship with the person. Such a pet is very strong attached to the owner. Therefore isolating the dog will make the animal miserable. Make bullmastiff a true family member and you become the owner of a loving, responsive and kind friend. issues related to socialization and learning should be addressed very responsible. Begin work from the earliest age. During this period, the puppy absorbs all that they teach him. The pet needs to be taught, at first glance, elementary things: don’t pull the leash while walking, don’t jump on people, don’t run and not break out. Bullmastiffs love children, but huge sizes dogs often lead to involuntary injuries that may be inflicted by a dog. Be careful and always keep an eye on dog and children. If there are kids in the family, then buying a bullmastiff better put off. 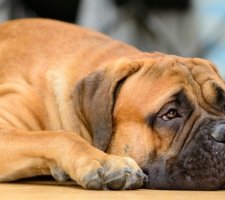 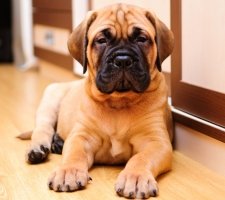 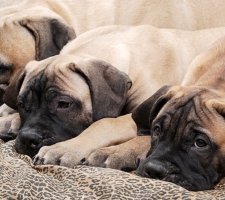 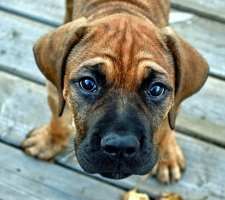 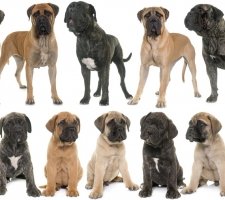 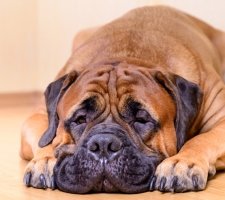 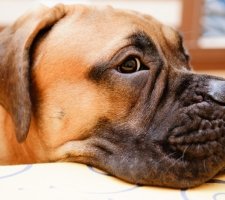 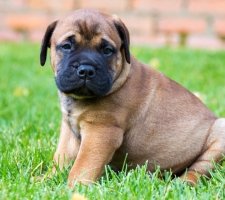 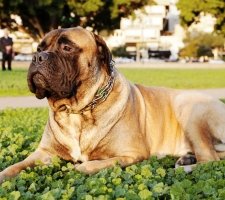 Bullmastiffs were bred in England to protect against poachers hunting grounds. Bullmastiff coped with this task excellent. Poachers could not get away from the dog. For the first time, dogs Bullmastiff breeds appeared around 1860. As follows from the name itself, bullmastiffs are a cross between a mastiff and a bulldog. The main task of the breeders was to bring the dog is more aggressive than the mastiff, but larger and not as fierce as bulldog. This breed was bred to discreetly track poachers and quickly catch them, while avoiding serious injuries to poachers themselves. In some documents this breed referred to as the “night assistant of the huntsmen.” American Club Dog breeding recognized bullmastiff as a separate breed in 1933. Today, bullmastiff is ranked 42nd among the breeds, registered by the Club, and in 2000 the breed was 52nd a place.

Bullmastiffs were bred to protect property, as well as livestock. These dogs take their duties very seriously. They exhibit real fearlessness. Particular successes were achieved in the fight against poachers on hunting grounds. catch attackers, but do not injure them. Their main the task was to keep the poacher until the moment he came reinforcement. Today, bullmastiffs do not cease to amaze their sizes and abilities, while the representatives of the breed remain obedient pets. True, to raise a dog with such character traits and personal qualities, it is necessary attention and a lot of time. Especially popular bullmastiffs used by farmers, because they are the best suited for cattle watching.

Special nutritional needs are met by relatively simple caring for a dog. Regular combing of wool will allow maintain her in a healthy, well-groomed state. Wrinkled folds also require care. They need to be kept clean and dry thoroughly after bathing. Especially popular dry dog shampoos are used by dog breeders. They allow keep your coat clean and pleasantly smelling. ears require control. Care must be taken to prevent irritation. or inflammation. They are treated with a special solution prescribed by the veterinarian. When treating your ears, it’s best to avoid using cotton tampons. By weekly mandatory hygiene procedures toothbrushing also applies. These dogs often appear bad breath. Regular brushing helps to avoid of this problem. Bullmastiffs basically grind their claws naturally way, but, if necessary, they need to be cut. how This is usually done when a light claw of claws appears during walk.

Bullmastiffs are not designed for insecure people. They are stubborn and wayward, so you must immediately find a common language with animals, so that between the pet and the owner there is trust and mutual understanding. The process of training and training of the bullmastiff should take place in a calm environment, while you need to be persistent and demanding. Dogs of this breed can use tricks and manipulations to take leadership into your own hands. Bulmastiff is not that dog that would be suitable for people never before contained dogs. They need constant attention from a leader with leadership skills. Learning and socialization process bullmastiffs should last a lifetime. Dogs of this breed in something like teenagers: they are always looking for something new, often ignore the rules of conduct. The main key to learning is sequence.

It is easy to guess that, due to its large size, bullmastiffs suffer from a variety of health problems. Bullmastiff puppies thin, they can not overeat, as well as overexert. IN otherwise, the animal may have developmental problems bone tissue, and this is a real disaster for the body. Besides of this, bullmastiffs are prone to obesity, and this is another reason maintaining an appropriate diet. To one of the genetic problems which is found in almost all representatives of the breed, refers to hip dysplasia. Cartilage throughout life the hip joints are erased. Arthritis develops. In heavy cases treatment involves surgery, consisting in hip arthroplasty. Such surgery costs more than one thousand dollars. Bullmastiffs are also prone to heart problems, such as pulmonary stenosis. This the disease is a narrowing of the valve between the right ventricle heart and a vessel carrying blood to the lungs. Annual examination specialists, including a cardiologist, will help to timely identify health problems and deal with them. Host attention is important condition for healthy and proper development of the animal. At the slightest suspected disease, you must immediately show bullmastiff a doctor who can prescribe the right treatment.