A bull terrier is a dog that is very attached to a person and tries to give all his attention and love to the owner. the main thing condition in the education and training of the bull terrier: early socialization, in Otherwise, the animal may show signs of aggression. Dogs of this breed are suitable for families who are active life. Bull terrier is difficult to confuse with other breeds. The specific shape of the head, muscular body and wayward character dogs are his hallmarks. This dog can to meet in the paintings of different artists and in many advertising clips. This animal is full of energy, with a soft heart, immense love for children and devotion to the family. Pet loves to walk with the owner. He will always keep him company while jogging or just during active games. Before you get this dog you should know that there is a lot of untruthful information about this beautiful breed. That’s why it’s important to know all the features. bull terrier before making a choice in his favor. Knowledge breed features will allow you to avoid disappointments and future failures in education. The main advantages of this breed: easy care coat due to weak manifestations of molting, clipping of claws and ear care as needed (on average once every two weeks). Cons of the breed: requires thorough washing after walking in rainy the weather, as well as the need for a permanent stay with family. 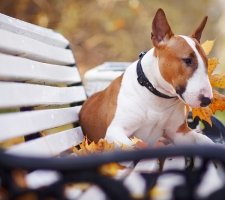 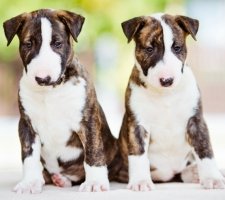 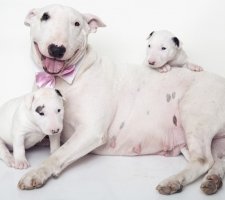 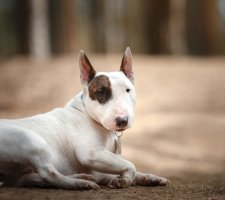 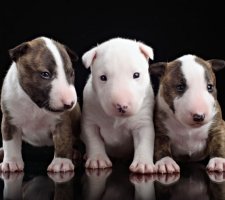 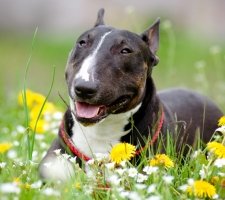 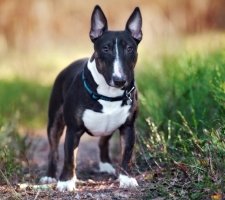 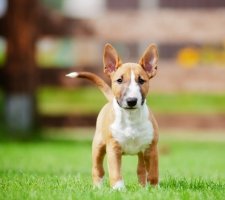 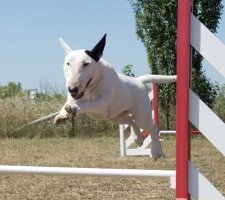 The bull terrier was bred by crossing a bulldog and a terrier. The main purpose of breeding this breed was to breed a dog, possessing the strength and tenacity of a bulldog, and attentiveness and dexterity of the terrier. The first bred bull terriers were different sizes. Some dogs were small in size. Their weight amounted to 2-4 kilograms, attributed them to dwarf breeds. Other weighed 8 kilograms, and later dogs were bred, whose weight began to reach 22-30 kilograms, that is, dogs, in size close to the modern bull terrier. It should be noted that selection these animals were successful, because really dog breeders managed breed an animal with an amazing combination of physiological Bulldog and terrier features. James Hinks, famous English nineteenth-century bull terrier breeder, became a dog breeder, which brought the appearance of this breed to its current state. During the selection, he used white bulldogs and white English Terriers, which today are considered an extinct breed. Thanks to his perseverance, he was able to get an amazing dog, which, having gained popularity in the 19th century, retained it until Today, bull terriers have become a fashionable curiosity for urban men of the 19th century and have not lost their popularity over their centenary the history of existence. The animal’s popularity was transferred to United States. American Kennel Club Recognized bull terrier a separate breed at the beginning of the last century, when some breeders began to cross him with staffordshire Terriers to breed dogs of different colors. Such crosses were successful. The dog breeder managed to get multi-colored bull terrier. Multi-colored bull terriers have been recognized a separate breed in 1936. Today the bull terrier takes 53 place among the registered breeds.

Bull terriers were bred a very long time ago. These dogs were bred for participation in dog fights. The pet is distinguished by its fearlessness, perseverance and considerable strength. But the fighting nature of these dogs is time has faded, so by nature a modern bull terrier is loyal, funny dog, a great companion for a family with an active way of life. These pets love being among people and be participants in all family events.

Looking after the bull terrier is very easy. To maintain wool in good condition enough weekly combing, which will be the key to a clean, shiny coat. The most active molt in these dogs occurs in spring and autumn, during this period comb A pet is needed every day. Bull terriers do not require frequent swimming. Many owners of these dogs use dry shampoo or ordinary wet wipes. This, sometimes, is enough for keeping the coat clean and preventing occurrence Bad smell. Bull Terrier, like all dogs, requires control behind the condition of the ears. This must be done every week. As means for treating the ears using a special solution, appointed by the veterinarian. Weekly brushing will save them in healthy condition and prevent bad breath. what As for the claws, they need to be trimmed as necessary.

Bull terriers are very smart. The learning process must begin with early age. The lesson should take place in a calm environment, and their duration should not be very long, otherwise it the dog will quickly get bored, even if used treats.The training and training of these animals should be systematic, and perseverance and exactingness. Sometimes, even after successful training, bull terriers can be stubborn and simply refuse to execute commands. This behavior is always if the family has small children, then the puppy must communicate with them from the first day of appearing in the house. Bull terriers love children very much, but sometimes they can be aggressive towards to other children, so the dog must be taught to communicate not only with their own, but also with other people’s children. In this regard, it is very important early socialization, which will be the key to raising a healthy and affectionate dog.

The average lifespan of bull terriers is about 10 -12 years old. The most common health problems include: allergy, congenital deafness, hereditary nephropathy, mitral dysplasia, dislocation of the patella, thigh and elbow dysplasia joint, as well as zinc deficiency. Eye problems often and heart. Cases of cancer are also common.