It’s no secret that most parrots are able to pronounce words. Large varieties are considered the most talkative, although among small birds meet talkers.

On the Internet, a video with a wavy parrot Archik is popular – over a million views. The feathered one has a real talent for learning human language. At the time of shooting Archik was only 7 months, but he already has a rich vocabulary, although usually the wavy only know a few words. Favorite bird phrases:

Also the wavy makes sounds of kisses and sings a song about Antoshka. And also the ingenious bird knows Pushkin’s poems: “I’m sitting behind bars in a wet dungeon, a young eagle fed in captivity. ” 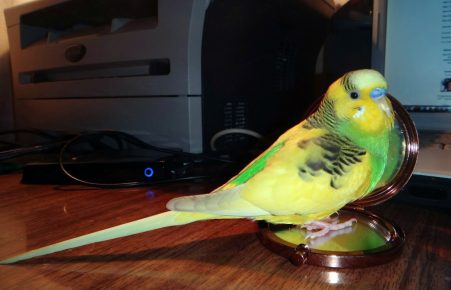 According to the mistress of Archik, he said the first words at about 3 of the month

In systematic studies, the first phrases of wavy are learned for 1-3 months. Easiest they remember words with hissing sounds and the letter “p”. It is believed that you need to start training in 3-4 month.

Archik is such a capable boy Wunderkind. The bird is not golden, but priceless.

There are a lot of speakers, but Archik’s pronunciation is simple exceptional!

Although some viewers have decided that continuous parrot chatter can get on your nerves.

is he chatting all day? I would have to kill him in a day wanted to)

Budgies are cute and funny birds that can keep up the conversation if taught. Among them are found and real geeks who know a lot of phrases. And your bird can speak? Share pet success in the comments!