American Staffordshire Terriers, also popularly referred to as amstaffs, staffords and just stuffs – strong, very muscular dogs of medium height (about 42-50 cm), their weight is 20-30 kg. The birthplace of this breed is the United States America, but the breed is popular not only there in our country There are many breeders and fans of the breed. Justice for the sake of amstaff, there are also a huge number of opponents. Indeed, in the media you can find information about the Staffords attack on other dogs and even people. Who is guilty of this – the dogs themselves or negligent owners? Perhaps the point is the lack of proper education since puppyhood. Connoisseurs of the breed strongly advise against have a puppy of the American Staffordshire Terrier for those who don’t will be able to properly train the dog and teach her how to live in society. Fighting staffords with blood present tendency to fearlessness (and in the absence of proper education and aggression), can bring a lot of grief to others. Then how good a well-mannered staff is quite good-natured, calm and devoted to the owners. Many times when staffords became best friends of children its owner. So, the American Staffordshire Terriers – Muscular dogs of an athletic warehouse. Their head is wide, square shape. Chewing and parietal muscles are well developed, convex. The transition from the average convexity of the forehead to the muzzle is well expressed. Ears are erect, high set (can be stopped). Middle nose size, mainly black. Eyes wide apart roundish, dark color. Teeth are white, large, bite scissor-shaped. Amstaff neck without suspension, muscular, wide at base, smoothly turning into a strong, short and wide back. In the area of the croup, the back is slightly sloping to the bottom. Amstaff Belly picked up. The tail is low set, not long, tapering to the tip. The limbs are powerful, straight and very muscular, especially the back. The wool of American staffs is tough, smooth, short, adjacent. Plain color – piebald, light and dark brown, black (white color is considered a vice). Tiger and spotty colors, white color in them should not exceed 20%. 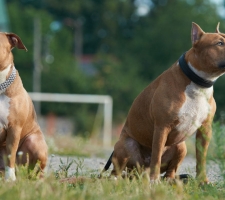 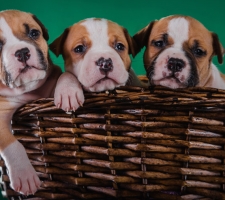 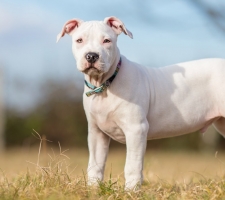 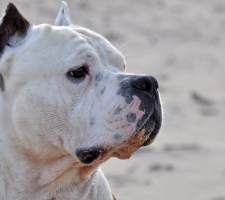 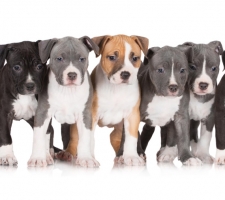 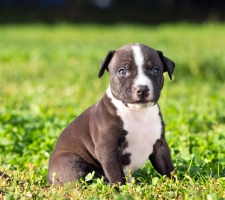 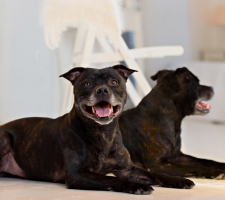 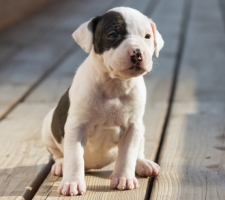 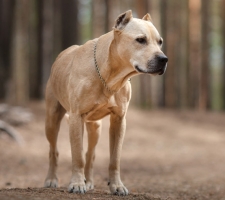 The ancestors of the Amstaffs are English terriers and bulldogs, which crossed even in their homeland – in England at the end of the 18th century. The descendants of such a mixture of blood were first called bull-and-terriers, and the main idea for breeding was to create such a dog that could be used as fearless, fast, very powerful, but at the same time compact fighter, combining in yourself the best qualities of both breeds. At first (before the beginning of 19 centuries) bull-and-terriers participated not only in battles with fellow dogs, but also with angry bulls. In the US these dogs appeared around the 1860s with English immigrants. Suddenly, bull-and-terriers became popular in the New World, not only both fighting dogs, but also working dogs. They were interested and simple toilers, and gambling lovers of dog fights, and American reputable dog handlers. Often they helped farmers in cattle grazing, home guard, fearlessly fought with predators – coyotes and wolves. In 1936, the American Kennel Club the breed was given a new name – Staffordshire Terrier, and American Staffordshire Terrier began to call such dogs decades later – in 1972, making changes to First Breed Standard established in 1971 by the International cynological federation.

If you do not take into account the tragic cases of attacks on a person, when the owner is more likely to blame, the amstaffs are calm, very strong physically, hardy and brave dogs. With them no enemy is intrepid, the main thing is that the owner can understand everything the importance of proper education. Getting along well american stafford in families with babies, but not recommended to bring a dog furious. Therefore, even a well-trained amstaff should not treat like a pet dog. They are smart, remember well resentment, quite vulnerable, punishing these animals with the help of beatings is not strongly recommended. Staffords – dogs with their character, quite strong and dominant. Therefore not worth it bring it to those families where pets live already – cats or dogs. Often they are threatened to be bitten by a fast, wayward stafford. Amstaffs are quite kind to family members of the owner attached, but without obsession. For the owner, they are ready to fight until end, selflessly and fearlessly. Staffords barking – a phenomenon rare, they often prefer to make noise. By the way these dogs are characterized by incredible speed of reaction.

Amstaffs can perfectly live both in the apartment and in the aviary the territory of suburban and private plots. But keep them on the chain recommended, better when the dog has the opportunity to free moving around the owner’s yard. Amstaffs living in apartments especially urgently need not only long, but also enough exhausting walks. It’s good if the owner can do enough load your dog, whether catching the ball or passing the strip obstacles. When outing, the Amstaffs are happy to swim, worn without a leash and a muzzle (which is impossible in the line cities). Caring for Amstaff wool is simple. These animals combed out several times a week (or at least weekly) with using a brush or furminator for short hair. Shedding Amstaffs occurs in spring and autumn, but may have a protracted character if the dog lives in an apartment with excessively dry air. Bathing should be carried out 2-3 times a year with the help of a special shampoo for dogs. The owner must always pay attention to condition of the eyes, ears and teeth of the dog, conducting hygienic procedures. Ears are cleaned about once a week or two with cotton a disk moistened with water or a means for splitting earwax. Dog eyes can be wiped daily or several times a week cotton swab dipped in water or any herbal anti-inflammatory decoction, which the doctor will recommend. It’s better to brush your teeth daily, acquiring a toothbrush for a dog for this (sometimes use ordinary “human” brush with medium hard bristles). Also for thawed dogs such as amstaffs, which can provoke a fight with four-legged brothers, should be acquired all components for a first-aid kit (thermometer, cotton wool, bandage, enema, zelenka or iodine, adsorbent, laxative, antibiotics, etc. drugs). The composition of the first-aid kit should be consulted by a veterinarian. Not medications designed for humans should be purchased.

Initially, it should be noted that you should never set off amstaffa on people or animals! Teach a kid staff with 2-3 months. The puppy should not only be accustomed to living in the house (prohibition of spoiling, nibbling, getting into bed, begging, chasing pets, if any, in the house). It is important to show the dog leadership that is always should belong only to the owner. Not worth it even at an early age carelessly treat staff bites or growl at someone from family members (including animals). Experienced owners note the excellent ability of amstaffs to train. How much they are fast moving, they catch teams just as fast presented by the owner or instructor. To educate best at a training site where staff will observe training other dogs. At the same time guide the actions of the dog the owner will be under the control of an experienced trainer. Of course, training can take place without the supervision of a specialist, but is there enough the owner of experience and knowledge to educate the animal on their own? Most often, they choose the General training course (OKD) or the UGS course (Guided city dog). In rare cases, after OKD or UGS can be taken the course of the ZKS (Guard Service).

Amstaffs can live to see their 15th birthday, but most often next to the owner they spend about 9-12 years. Hardy, physically strong, with high immunity, american staffordshire terriers are considered strong dogs (in terms of health), but they also have weak spots. Among the diseases of the breed, there are: joint problems (hip dysplasia – often hereditary, arthritis), mechanical injuries (torn ligaments, lacerations after a fight, bruises and etc.), heart failure (usually in old age), eye problems (retinal atrophy, cataract), bloating (which is dangerous by inversion of the stomach), obesity (more often in elderly age), tumors (mastocytoma, histiocytoma (including histiocytosis) – skin tumors), allergies of various etiologies.